AUSTIN, Texas–(HISPANIC PR WIRE)–Dec. 22, 2003–After taking the boxing world by storm this year and conquering seemingly insurmountable obstacles, Jesus “El Matador” Chavez was honored with Miller Brewing Company’s Boxer of the Year award during the Premios FOX Sports Awards in Miami this past Wednesday.

“This award is the finishing touch to all the hard work and challenges I’ve had to overcome,” said Chavez, WBC super featherweight champion. “I am grateful to everyone, including Miller Brewing Company, for supporting me in my efforts and inspiring me to be the best.”

In 2001 Chavez was featured in Marcy Garriot’s PBS documentary, Split Decision, a moving story of struggle, survival and redemption. Chavez’s story is one of an ambitious young boxer who gets into trouble, does his time and is deported to Mexico twice, sparking a long battle over his citizenship status. The documentary will now be released nationally via DVD in February; just two weeks before Chavez’s title defense in what experts are calling “the fight of his life” against Eric Morales in Las Vegas.

This past August, Chavez reached his dream of becoming a champion when he defeated Sirimongkol Singmanasuk of Thailand before his hometown crowd in Austin. Chavez beat the odds against him and along the way earned the WBC super featherweight championship and the respect from the boxing community.

“Jesus’ life is an inspiration to us all and it is truly an honor to be associated with a person of his character,” said Ron Acosta, public relations manager for Miller Brewing Company. “Miller is proud to honor him for his exceptional skills as an athlete, for his commitment to providing inspiration to others and his perseverance in overcoming personal struggles.”

The Premios FOX Sports Awards are a newly created annual awards show, produced in response to the growing number of significant Hispanic athletes making a mark on the sports world. 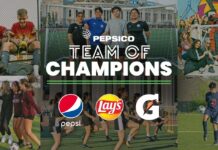