New York City, NY–(HISPANIC PR WIRE)–October 9, 2007–CATALINA magazine and the National Association of Latina Leaders (NALL) today announced the 2007 “Groundbreaking Latina” Awards recipients, who will be celebrated at the off-Broadway theatre house Studio Dante, in New York City, NY, on Tuesday, October 9, 2007. Co-hosted by Cathy Areu, of CATALINA magazine, and Leonard James, of ExxonMobil, the Groundbreaking Latinas awards ceremony will honor Hispanic women for their outstanding leadership in their respective fields. A unique roster of celebrity presenters will complete the inspirational evening agenda.

For the sixth consecutive year, our Groundbreaking Latinas awards reception and ceremony is going to unite Hispanic leaders to celebrate groundbreaking Latinas, from coast to coast. “I am thrilled we are able to honor such a diverse group of Latina leaders, thanks to the support of our sponsors,” said Cathy Areu, publisher of CATALINA.

“¡Felizidades! On behalf of VOLVO Cars of North America, LLC, I am pleased to congratulate the honorees of this year’s Catalina Groundbreaking Awards. This event celebrates the significant contributions of extraordinary women who continue to make to our nation strong. We are proud to be a corporate sponsor for the fifth consecutive year. I hope this celebration will continue to inspire young women of every heritage to follow the examples of today’s honorees in their pursuit of excellence,” said Sylvia Lopez-Navarro, Diversity Marketing Manager, VOLVO Cars of North America.

The following is a list of the 2007 Groundbreaking Latinas Awards Honorees:

Tina Ramirez – As the Artistic Director for Ballet Hispanico, Tina started a free initiative for children called “Primeros Pasos” – a 15-week educational program which teaches over 1,650 students throughout NYC Public schools about Hispanic culture and the Arts.

Hilda Gurdián – Hilda is the creator, publisher and editor of La Noticia, a weekly newspaper in Charlotte – the first Spanish-language newspaper in her community. Today, her publication has one of the widest distributions in the area.

Natalie Morales – Natalie is the only Latina co-anchor on the widely successful morning program, The Today Show. In 2007, she volunteered for the prestigious Heart Truth Campaign to promote good heart health for women in the U.S.

Diana Maria Riva – Diana is the only Latina star of the Lifetime show Slice of Life, named an important part of television’s “new feminist movement” by the New York Times. Diana has consistently broken stereotypes in Hollywood.

“We believe that talent comes in all colors, backgrounds, and genders. As we continue our efforts to make Exxon, Mobil and On the Run the most sought after brands in the industry, we use CATALINA magazine to explore ways to engage in more dialogue with Latinas interested in pursuing entrepreneurial opportunities with ExxonMobil,” said Ben Soraci, U.S. Retail Sales Director, ExxonMobil Fuels Marketing Company. “We are proud to sponsor the Groundbreaking Latina Entrepreneur of the Year and congratulate Hilda Gurdián on her business achievements as publisher and editor of La Noticia. We look forward to our continued collaboration with CATALINA to recognize Groundbreaking Latinas.”

Throughout the year, CATALINA receives reader nominations and suggestions for the “Groundbreaking Latina” awards. The NALL board chooses the final winners based on their groundbreaking work in their field, industry, company, or community. Since 2002, these have been the first and only awards of their kind.

“Deloitte is thrilled to be a part of CATALINA’s 6th Annual Hispanic Heritage Month celebration and we applaud the accomplishments of this year’s ‘Groundbreaking Latina’ award recipients,” said Redia Anderson Banks, chief diversity officer, Deloitte & Touche USA LLP. “Each of the honorees exemplifies the best talent in their fields and are extraordinary roles models inside and outside of the Hispanic community.”

All honored Latinas will receive an exquisite Gevril (http://www.gevril.net) timepiece, and other unique gifts. 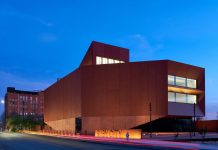