Under the terms of the agreement, ESPN Deportes, the company’s Spanish-language network in the U.S., will air a total of 70 games – 14 live. ESPN Deportes will air select live and replay games each round. In addition, ESPN Deportes will produce, distribute and assist SCP in marketing the property utilizing its expansive expertise and outreach in the U.S. The deal also features an extensive package of Friendly matches in 2008 and 2009 showcasing South American teams. Additionally, ESPN Deportes will also carry official highlights show for the tournament, providing a complete re-cap of each round. The network will also air a preview show each round and provide extensive coverage of the South American World Cup Qualifiers across news and information shows led by SportsCenter, Fuera de Juego and Cronometro.

“This deal underscores ESPN Deportes’ commitment to soccer fans in the U.S.,” said Lino Garcia, general manager, ESPN Deportes. “The World Cup is the pinnacle of soccer competition and we’re delighted to be able to offer comprehensive coverage of teams from South America as they face off to represent their countries in this magnificent event.”

“This agreement with ESPN exemplifies the value that this property and soccer overall possess,” said Chris Bevilacqua, partner, SCP Worldwide. “We look forward to working closely with them to utilize their resources as we tap into the robust community this tournament obviously appeals to. Additionally, this agreement also gives us the unique ability to further develop related content that we either own or will create and will program on one of the most respected and influential networks in the business.”

Based in New York City, SCP Worldwide is a sports, media and entertainment company with worldwide assets that is owned and operated by David W. Checketts and his partners, Mike McCarthy, Ken Munoz, Chris Bevilacqua, Dean Howes and Alan Pace. Together they form an experienced management team with a proven track record in the sports, entertainment, media and financial fields with a combined impressive resume which includes Madison Square Garden and its cable networks MSG, FSN New York, the first-ever college sports network, CSTV, the first-ever college conference network, the MTN and financial stalwart Lehman Brothers. 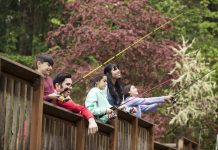