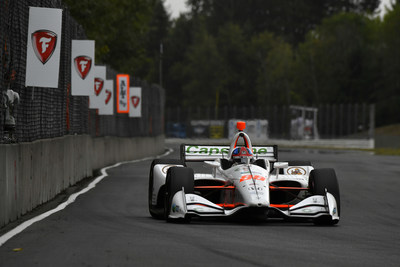 Advancing through the first two rounds of NTT IndyCar Series knockout qualifying, Herta trailed early-pace setter Will Power after all six final-round qualifiers made their initial laps.  Exiting the pits with just over a minute remaining in the session, Herta posted a lap of 57.8111 seconds around the 1.9-mile PIR road course to edge Power by 19 one-thousandths of a second.  Today’s performance is the second IndyCar Series pole of the season for the 19-year-old rookie, with Herta’s first pole having come on the Road America road course in June.

Television coverage of Sunday’s Grand Prix of Portland, the 16th and next-to-last round of the 2019 season, begins at 3 p.m. EDT on NBC.

Colton Herta (Harding Steinbrenner Racing Honda) Pole qualifier, second pole of 2019 and second career IndyCar Series pole: “We always planned to do three-and-one [three laps on the Firestone primary ‘Black’ sidewall tires, and one lap on the softer compound ‘Reds’ in the final round of qualifying].  We didn’t have it on the ‘Blacks’, I think we were like five-hundredths [of a second] off Will [Power].  Obviously, ‘Reds’ were the right choice and we pulled it off.  It’s always a good day when you can beat Will Power in the Fast Six [final qualifying]. Before I knew we won the pole position, I went on the radio and heard everyone cheering, so to find out that way was really cool. This is awesome.”