MIAMI, Sept. 10, 2020 /PRNewswire-HISPANIC PR WIRE/ — With Latinos poised to become the largest ethnic minority group in the electorate this November, Telemundo, the leading media company serving U.S. Hispanics, today released an in-depth study examining a wide range of political and social views of young Latinos, the driving force behind Hispanic voter growth. In partnership with BuzzFeed News, the report titled “Young Latinos: A Generation of Change” includes a national online survey of registered Latino voters aged 18 to 34 and provides a detailed look at one of the country’s fastest-growing and most dynamic voting groups in this year’s historic election. To download the study, click here. 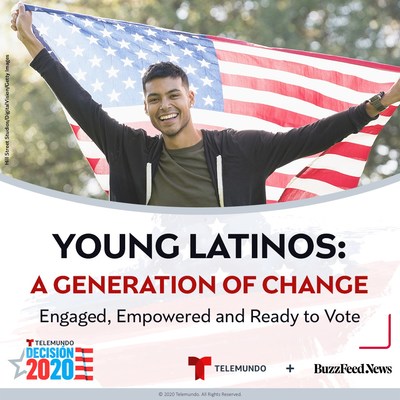 Telemundo conducted the landmark study as part of its company-wide initiative “Decision 2020,” a nonpartisan multiplatform news and civic engagement effort to provide Latinos with comprehensive information and resources on the issues and the candidates running in the 2020 election. The initiative features expanded news coverage, virtual town halls and hyper-local online voter registration drives with national and local partner organizations to support Latinos during this year’s election cycle. Under Decision 2020, Telemundo has launched new digital shows in English and Spanish, offering important election information to young Hispanic voters seeking Latino perspectives in bilingual formats.

“This new research shows that young Latinos, the majority of which are U.S. born and politically engaged, intend to go to the polls in November at unprecedented levels,” said Mónica Gil, executive vice president and chief administrative and marketing officer at NBCUniversal Telemundo Enterprises. “With one million young Latino voters becoming eligible to vote each year over the next decade, this energized and hardworking ‘Generation of Change’ is driven by their conviction to secure a place as central actors in our nation’s future. This report highlights that there is a clear opportunity for candidates and leaders of all political parties to engage and tap into this vibrant group of voters with plans and solutions that acknowledge and speak directly to the issues that matter most to them.”

The research paper’s findings offer insight into a critical demographic which, according to U.S. Census Bureau data, turned out to vote in the 2018 midterm elections at nearly twice the rate of previous midterm election cycles. With 91% of young Latinos born in the U.S., since the 2016 presidential election some 3.6 million Latinos will have turned 18 in time to vote in November. Overall this year, a record 32 million Latinos will be eligible to vote, making them the largest share of minority voters for the first time. Solid gains in buying power, college attainment, steady earnings and civic participation over the past several years give young Hispanics growing clout and political influence.

“We are thrilled to be partnering with Telemundo, a vital news organization, to get a better understanding of a rapidly expanding and consequential portion of the electorate,” said Matt Berman, politics editor at BuzzFeed News. “This research gives a great sense of what actually matters to young Latinos, and how they’re engaging with and shaping American politics.”

Key insights from the “Young Latinos: A Generation of Change” study include:

About NBCUniversal Telemundo Enterprises
NBCUniversal Telemundo Enterprises is a world-class media company leading the industry in the production and distribution of high-quality Spanish-language content to U.S. Hispanics and audiences around the world. This fast-growing multiplatform portfolio is comprised of the Telemundo Network and Station Group, Telemundo Deportes, Telemundo Global Studios, Universo, and a Revenue Strategy & Innovation unit. Telemundo Network features original Spanish-language entertainment, news, and sports content reaching 94% of U.S. Hispanic TV households in 210 markets through 30 local stations, 50 affiliates, and its national feed. Telemundo also owns WKAQ, a television station that serves viewers in Puerto Rico. Telemundo Deportes is the designated Spanish-language home of two of the world’s most popular sporting events: FIFA World Cup™ through 2026 and the Summer Olympic Games through 2032. Telemundo Global Studios is the company’s domestic and international scripted production unit, including Telemundo Studios, Telemundo International Studios, Telemundo International, Underground Producciones, an internationally renowned production boutique based in Argentina as well as all of the company’s co-production partnerships. As the #1 media company reaching Hispanics and millennials online, the Revenue Strategy & Innovation unit distributes original content across multiple platforms, maximizing its exclusive partnerships with properties such as BuzzFeed, Vox, and Snapchat. Through Telemundo Internacional, the largest U.S.-based distributor of Spanish-language content in the world; and Universo, the company reflects the diverse lifestyle, cultural experience, and language of its expanding audience. NBCUniversal Telemundo Enterprises is a division of NBCUniversal, a subsidiary of Comcast Corporation.

Motivated By The Pandemic And Social Issues, Young Latinos Are Energized About The Presidential Race And Plan To Vote In November According To New Report By Telemundo