TORRANCE, Calif., Sept. 19, 2018 /PRNewswire-HISPANIC PR WIRE/ — Acura has partnered with influencers across multiple social platforms to encourage people to look up from their daily lives and share their unique views and experiences using #LookUp. The campaign is inspired by the organic use of #LookUp, which boasts nearly four million posts on Instagram alone. Acura’s campaign features stunning photography of the dramatically redesigned 2019 Acura RDX interior, with special focus on its expansive panoramic moonroof as the canvas for this visually-driven campaign. The Acura #LookUp campaign will appear across the brand’s social channels with emphasis on Pinterest and Instagram: https://acura.us/LookUp

For the #LookUp campaign, Acura recruited content creators to showcase the RDX in unexpected, visually dynamic ways, including photography captured in a wide range of environments – from the forest to the city, from daybreak to a starry night, from the mountains to the desert. These influencers have created “How-To” guides and step-by-step tutorials meant to inspire each influencer’s individual fans and followers to explore the world through the lens of #LookUp. The focus of the guides are driven by each influencer’s specific area of expertise, with how-tos on photographing the Milky Way, urban environments, composing the perfect shot, and more: https://www.instagram.com/p/Bnzyho0n0Jo/?taken-by=bryanadamc

Launching now and continuing through the fall, the campaign’s content creators, including Bryan Castillo (@bryanadamc) and Tiffany Nguyen (@Tiffpenguin) will share their versions of what happens when they #Lookup on their Instagram and Facebook pages, including shots of the Acura RDX in a dramatic desert landscape and images of the vehicle going over the iconic Golden Gate Bridge. The collection of photography highlights what you see when you shoot out of RDX’s panoramic moonroof. Examples of the photos can be previewed here: https://acura.us/BryanCastillo; https://acura.us/TiffanyNguyen.

The 2019 RDX #LookUp campaign was developed with Acura by Agency of Record, MullenLowe.

#LookUp is the next expression of the “Everything We Ever Imagined and Then Some” RDX marketing campaign that debuted in June: https://bit.ly/2MMGSqF. Along with #LookUp, the multichannel RDX campaign traces the authentic roots of Precision Crafted Performance, while highlighting RDX’s expression of next-generation Acura design, performance and technology. 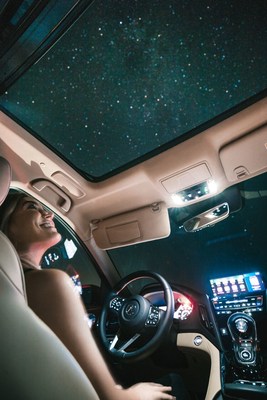