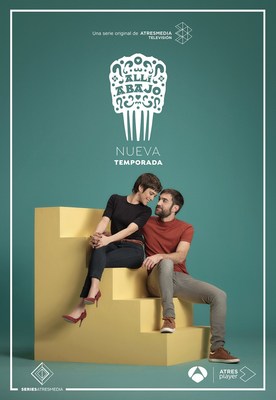 On May 6, Atreseries will premiere the fifth and final season of ‘Allí abajo,’ an Atresmedia original series. This new chapter will feature Paco Tous (La Casa de Papel, Apaches and Los Hombres de Paco) as its star signing, and it’s the season when the successful Atreseries comedy becomes the only prime time series, of all the series that premiered this decade in Spain, to make it to its fifth season. ‘Allí abajo’ is one of the most successful Spanish series in recent years. It’s also available on demand on ATRESPLAYER, the group’s OTT platform.

Produced by Atresmedia in concert with Plano a Plano, this fifth season sees ‘Allí abajo’ keep the majority of its highly touted cast.  María León (Carmen) and Jon Plazaola (Iñaki) are back to lead a cast full of renowned actors like Mariano Peña, Óscar Terol and Nerea Garmendia

The show also maintains much of its technical staff. The episodes will be directed by Jacobo Martos and Juanma Pachón, while Roberto Serrano (showrunner), David Cotarelo, Montaña Marchena, Sergi Guardado, Aurora Pérez, Luis Fabra and Nerea Gil will lead the scriptwriting.

How Carmen and Iñaki kick off the new season

CARMEN: busy with work and a “new” child

The director of Híspalis has to deal with construction delays at the hospital, which forces them to take on new investors.

This decision will mark the entire season, since the new Chinese owners will change how things are done and introduce a series of changes that will have the workers scrambling.

Carmen will rise to become the true leader of the hospital, defending her colleagues and constantly ensuring that Híspalis runs smoothly as she worries more about the well-being of the patients than about profits.

On a personal level, just as everything seemed to be going great for Iñaki, he shows up with a new kid, which is going to disrupt their relationship as a couple and as parents.

IÑAKI: back to Seville and twist in his work life

Iñaki is back together with Carmen, but they’ve both decided to take it slowly so as not make the same mistakes.

As a result, he’s staying in Seville, where he’s going to be a full-time father while he ponders a career change.

But his plans go out the window when Gotzone (Nerea Garmendia) introduces him to the boy they had together: Jon. From then on, Iñaki will devote himself to his two children, Elaia and Jon, only to see that it’s not easy to take care of two babies while looking for a job and trying to rekindle his relationship with Carmen.