ST. PETERSBURG, Florida, March 11, 2018 /PRNewswire-HISPANIC PR WIRE/ — A thrilling late-race battle for victory ended in disappointment for Robert Wickens, and a second consecutive Firestone Grand Prix of St. Petersburg win for Sebastien Bourdais, as Honda drivers and teams swept the season-opening round of the 2018 Verizon IndyCar Series.  Honda drivers claimed the top six finishing positions and eight of the top 10. 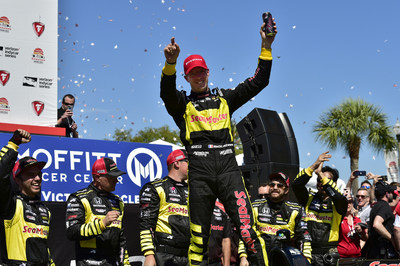 Four Honda drivers led 105 laps of the 110-lap contest Sunday on the 1.8-mile downtown St. Petersburg circuit, with Wickens dominating at the point for a race-high 69 laps.  But a late-race restart on Lap 108 gave the second-running Alexander Rossi an opportunity to mount a challenge for the lead.  The pair of Honda drivers made contact in Turn One, with Wickens spinning and making light contact with the outside wall.  An opportunistic Bourdais used the opening to jump from third to first, and claimed the victory as the race ended under caution.

A hard-charging Graham Rahal used all 110 laps to climb from last in the starting field – due to a spin in qualifying – to finish an excellent second; with Rossi recovering from his own slide following the contact with Wickens to complete the victory podium in third.

In a wild race that featured eight caution flags for a total of 21 laps, there still were 366 on-track passes in the race, a record for St. Petersburg.  Honda drivers dominated the top 10, with James Hinchcliffe [Schmidt Peterson Motorsports], Ryan Hunter-Reay [Andretti Autosport] and Scott Dixon [Chip Ganassi Racing] claiming fourth through sixth, respectively, and five Honda teams represented in the top six.  Ed Jones finished eighth in his first race with the Ganassi team and Marco Andretti took the checkers in ninth for Honda and Andretti Autosport.

Race day got under way with Arie Luyendyk Jr., star of the most recent season of The Bachelor, giving new fiancé Lauren Burnham a ride around the St. Petersburg circuit in the Honda “Fastest Seat in Sports” two-seater Indy car.  Indy legend Mario Andretti then took Burnham for a second ride, this time at the head of the 24-car field, during the parade laps leading up to today’s race start.

Video recaps from this weekend’s Honda IndyCar Series season opener in St. Petersburg are available on the “Honda Racing/HPD” YouTube channel. Produced by the Carolinas Production Group, the video packages can be found at: https://www.youtube.com/HondaRacingHPDTV.

The Verizon IndyCar Series next heads west to ISM Raceway near Phoenix, Arizona, for the Desert Diamond Phoenix Grand Prix, the first Saturday night short-oval race of 2018, which will be broadcast live on the NBC Sports Network at 9 p.m. EDT on Saturday, April 7.

Sebastien Bourdais (Dale Coyne Racing with Vasser-Sullivan Honda) started 14th, finished 1st, second consecutive St. Petersburg victory, 37th career Indy car win, sixth victory for the Dale Coyne Racing organization: “This is emotional, because I was able to come back from a few broken bones [suffered in his crash at Indianapolis last year] to this victory circle. I couldn’t be any happier for Dale Coyne Racing with Vasser-Sullivan, SealMaster and everybody…all the boys. They worked so hard. It’s a tiny group, but they work their tails off. We didn’t have the fastest car today, but we had consistency and we pulled it together. We were going to get a podium today, which was awesome. I was really happy for Robert [Wickens] and kind of heartbroken for him.  But for us, it is just such an upset. I can’t quite put it into words.”

Alexander Rossi (Andretti Autosport Honda) started 12th, finished 3rd:  “We started going for the win [leading to the contact with Wickens]. The ‘overtake’ [push-to-pass button] was active. Had a run on Robbie, and he missed the overtake and then went on through the marbles in a big way and I did everything I could to pull it up. Obviously, you don’t want that to happen in the race. They [race officials] briefly talked about how you can’t move and react in the drivers’ meeting.”

Robert Wickens (Schmidt Peterson Motorsports Honda) pole qualifier, led a race-high 69 laps before contact ended his race: “I didn’t want to defend too hard because there were so many ‘marbles’ offline.  I figured if Alexander [Rossi] wanted to go there, go for it. I gave him space around the outside. I braked late [for Turn 1], I made the corner, and then we had some contact.  Obviously, it put me into a spin into the wall. Not the way I imagined the day going for me, or my Lucas Oil guys. It was all a little bit confusing because I was told on the radio we were going green but they didn’t turn the lights off the pace car. So I didn’t get the best restart, probably my worst one of the whole day. I just need to see everything before I comment [more]. At the end of the day, when you are running up front the entire race and then you don’t finish, it doesn’t matter how your day goes, you never want that to happen.”

Art St. Cyr (President, Honda Performance Development) on today’s season-opening Honda sweep: “That was a great way to start the season! It’s always nice to see all the hard work put in by the HPD associates rewarded after a very busy off-season.  Congratulations to Sebastien Bourdais for his repeat victory at his hometown event; to the Dale Coyne organization, and to new Honda team co-owners Jimmy Vasser and James Sullivan.  Also congratulations to Graham for his run from last at the start to second at the checkers.  I feel bad for Robbie [Wickens] after such a dominant performance.  He clearly proved that he and the entire Schmidt Peterson Motorsports group are going to be a force to be reckoned with going forward.”