HOUSTON, Feb. 12, 2018 /PRNewswire-HISPANIC PR WIRE/ — Today, Bud Light announced a new campaign aimed at going big in Texas in 2018 with multi-faceted programming across the Lonestar state. After launching a successful regional program in 2017, the brand will take its “Brewed Deep in the Heart” campaign to the next level with an ongoing music partnership with Texas-native musicians Siggno and Josh Abbott Band. 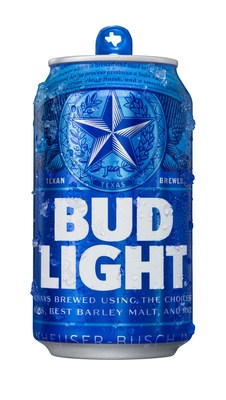 The creative campaign, which encompasses out-of-home, TV, digital, and radio commercials in both English and Spanish, along with special edition Texas packaging featuring the Texas Lonestar and a cutout of the state on the tab. A new Texas-specific commercial featuring Houston Brewery employee Hannah Kight, “Stamping Iron” will debut regionally on February 12 and additional TV creative will be launched later in 2018. Additionally, the Texan-pride tabs will feature a cutout of the state on all Texas-edition packaging.

“We have been brewing Bud Light in Texas for over 30 years, so today I’m proud to announce the new partners and creative we have lined up for 2018,” said Andy Goeler, Vice President, Marketing Bud Light. “Texas has always been an important market to our business, and Josh Abbott Band and Siggno are true Texas musicians and are the perfect addition to our programming in the state. We are excited to activate with them in 2018.”

In celebration of its Texan roots, the brand enlisted the help of Josh Abbott Band to re-record the iconic Texan song, “Deep in the Heart of Texas“. The track will be performed on the multi-city Josh Abbott Band tour statewide, and will be featured in one of Bud Light’s new Texas-focused commercials. Larger music programming in the region will fuel fan engagement, as Bud Light will be the sponsor for Josh Abbott Band ‘Brewed Deep in the Heart’ regional tour, and Siggno’s 100-show “Monster Tour” tour into spring 2018.

“We want our fans to have the best experience at all of our shows, whether singing along, having a few cold beers, or just enjoying our music with friends,” said Josh Abbott. “When we got the news that Bud Light was going big in Texas in 2018 we were excited to join forces and knew we had to be a part of it. ‘Deep in the Heart of Texas’ is such an iconic song that everyone knows in the state and as proud Texans, we are thrilled to be able to record our version of it and that it will be used as part of Bud Light’s campaign.”

Siggno’s 100-city tour will kick-off in February, and is sponsored by Bud Light. “Texas is our home and our Texan fans have inspired our music for nearly 20 years. We are so honored to be a part of Bud Light’s ‘Brewed Deep in the Heart’ campaign and look forward to seeing our fans on the road.”

Bud Light’s largest brewery sits in Houston and has for over 35 years, with over 600 Texans brewing the beer every day. To learn more about Bud Light go to www.budlight.com or follow Bud Light on Facebook at Facebook.com/BudLight, on Twitter at @BudLight and on Instagram at @BudLight.

About Bud Light
Introduced in 1982, Bud Light is a premium light lager with a superior drinkability that has made it the best-selling and most popular beer in the United States. Bud Light is brewed using a blend of premium aroma hop varieties, both American-grown and imported, and a combination of barley malts and rice. The light-bodied beer features a fresh, clean and subtle hop aroma, delicate malt sweetness and a crisp finish that delivers the ultimate refreshment. For more information, visit www.BudLight.com.

About Josh Abbott Band
Country favorites Josh Abbott Band released their latest album Until My Voice Goes Out in August 2017.    The critically acclaimed album is a hopeful look into the future and an embrace of life and its potential. The seven piece band also incorporates strings and a horn section for the first time on the album and has been touring with the additional ensemble all Fall and Winter. The band makes a statement through the entire risk-taking album – about its continued growth and evolution as it moves forward, a decade after that first single gave Texas a taste of JAB’s brand of country.  JAB’s last album ‘Front Row Seat’ debuted at #1 on Billboard’s Independent Albums chart and garnered high praise across the board. JAB has performed  on national television on Jimmy Kimmel Live, Conan and Fox 7 Friends.   Hailed as one of the top Texas country acts, Josh Abbott Band is renowned for heartfelt songwriting and traditional instrumentation.  The independent band has accumulated over 80 million total streams, 18 million YouTube/VEVO views has over 1.5 million single sales and 230,000 album sales.  Additionally, the band has sold over 1.2 million concert tickets the last few years.  Josh Abbott Band is Josh Abbott (vocals, guitar), Preston Wait (fiddle, electric guitar), Edward Villanueva (drums),  James Hertless (bass),  Caleb Keeter (electric guitar),  Austin Davis (banjo), David Fralin (Keyboard).