DENVER, Aug. 27, 2018 /PRNewswire-HISPANIC PR WIRE/ — Lineal Middleweight World Champion Canelo Alvarez (49-1-2, 34 KOs) and WBC/WBA/IBO Middleweight World Champion Gennady Golovkin (37-0-1, 33 KOs) return to the T-Mobile Arena in Las Vegas for a highly anticipated rematch. The first fight sold out in only two weeks, and once again fans across the country will be able to get front-row seats to the 12-round, mega-fight — “Canelo vs. GGG 2” – live at their local movie theater. Fans won’t want to miss this epic match-up of two of the most explosive, heavy-handed fighters in the sport today. And they have promised they will not leave the rematch in the judges’ hands. 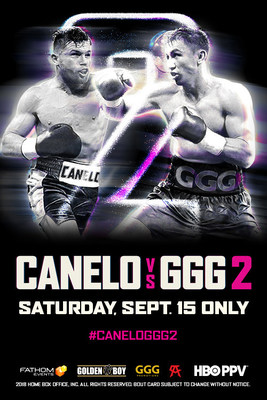 Tickets for “Canelo vs. GGG 2” can be purchased online by visiting www.FathomEvents.com or at participating theater box offices. Fans throughout the U.S. will be able to enjoy the event in more than 450 select movie theaters through Fathom’s Digital Broadcast Network (DBN). A complete list of theater locations is available on the Fathom Events website (theaters and participants are subject to change).

Canelo said, “I’m delighted to once again participate in one of the most important boxing events in history,” said Canelo Alvarez. “This second fight is for the benefit and pleasure of all fans who desire to see the best fight the best. This time, [Gennady] Golovkin won’t have any excuses regarding the judges because I’m coming to knock him out.”

Golovkin said, “It feels right that the rematch returns to the scene of the crime. This time there will be no drama with a decision. I won the first fight and left the ring as world champion wearing all the belts. And I am going to win the second fight. It is going to be a record fight and a golden night for me and boxing at T-Mobile Arena.”

Oscar De La Hoya, Chairman and CEO of Golden Boy Promotions said, “There is no better place to host the historic rematch between Canelo and Golovkin than T-Mobile Arena in Las Vegas. Las Vegas on a fight weekend during Cinco de Mayo is electric, and I know fans will travel from around the world to be here to participate in the celebratory atmosphere. Historic boxing matches like Canelo vs. GGG 2 belong in a place like Las Vegas, which offers fans the full and rich experience they are looking for on a big fight weekend.”

“Canelo vs. Golovkin: Supremacy left the fight world clamoring for this epic rematch.  We are proud to once again team up with some of the very best in the boxing business to bring this fight to cinemas nationwide,” said Ray Nutt, Fathom Events CEO. “Fight fans are in for a real treat when these warriors head back into the squared circle and we’re excited to be bringing it to their local cinemas.”

For artwork/photos related to “Canelo vs. GGG 2” visit the Fathom Events press site.