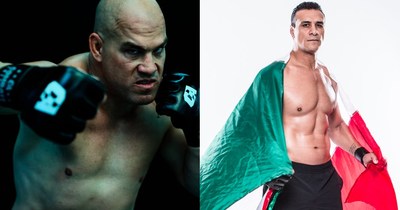 It was also announced today that the two, who will face off at a 210-pound catchweight, have agreed to an unprecedented and historic “winner take all” title belt challenge.

“This is a one-of-a-kind, larger than life fight– one of the greatest MMA superstars of all-time, facing off with one of professional wrestling’s most decorated champions and an accomplished MMA fighter in his own right,” said Combate Americas CEO Campbell McLaren. “On top of all that, these two legends are putting their belts where their mouths are. It’s the type of fight that comes around once or twice in a lifetime, and Combate Americas is going to deliver it to fans worldwide from the U.S.-Mexico border.”

One of the biggest pay-per-view television draws in MMA history, Ortiz of Huntington Beach, Calif. has produced some of the sport’s most memorable moments while facing off with nearly every major rival in his weight class and defeating the likes of Ryan Bader, Ken Shamrock, Forrest Griffin and Stephan Bonnar.

Ortiz’s status in the sport has garnered him starring roles in three different hit reality television shows –The Celebrity Apprentice hosted by Donald Trump, and two different seasons of the UFC’s The Ultimate Fighter.

Ortiz is coming off a first round knockout of fellow UFC Hall of Famer and former world champion Chuck Liddell in Los Angeles last November 24.

Born in San Luis Potosi, SLP, Mexico, into one of the most famous Lucha Libre family dynasties, El Patrón, who resides in San Antonio, Texas, has blazed a trail to superstardom in his own manner, establishing himself as a force in three different combat sports – Greco Roman wrestling, American professional wrestling and MMA.

El Patrón is the only athlete in history to win two of the WWE’s most coveted titles – the “Royal Rumble” and the “Money in the Bank” ladder match – in the same year (2011).

Competing under his Lucha Libre name, “Dos Caras, Jr.” and training under former UFC and Vale Tudo champion Marco Ruas, El Patrón crossed over into the world of MMA, where he fought under the promotion of the former number one MMA franchise in the world, PRIDE, and earned all of his career victories by way of (T)KO or submission.

El Patrón announced last October that he had returned to MMA training and was intent on competing for Combate Americas.

He has since re-located for training camp to Glendale, Ariz., the home of former UFC star and fellow Mexican American Javier “Chunty Boy” Torres‘ MMA camp, where El Patrón has been preparing for his MMA return with former Ortiz opponent Bader as well as with former UFC star and NCAA Division I All-American wrestler C.B. Dollaway, among others.

Since launching its live event series in 2015, Combate Americas has catapulted to the top of the food chain in the sport of MMA, consistently beating the television ratings of general market competitors in the U.S., and amassing millions of television viewers regularly across Latin America and Spain.

Combate Americas live television programming has also attracted almost an entirely new audience to the sport. According to Nielsen research produced this year, over 90 percent of Combate Americas’ television audience in the U.S. is comprised of viewers that do not watch general market MMA programming.

Combate Americas CEO Campbell McLaren, also the co-founder/co-creator of the Ultimate Fighting Championship (UFC), has been described by New York Magazine as “the marketing genius behind the UFC,” while Yahoo Sports has said he “knows more about the sport than just about anyone in it today.” With an unprecedented and cutting edge product and a blue-chip ownership and management team, Combate Americas is poised to break new ground and bring about a new era in world championship level MMA competition.