GUATEMALA CITY, Sept. 26, 2018 /PRNewswire/ — After an 18 year hiatus, Guatemalan sociologist, Dionisio Gutiérrez, debuted his new television program, “Razon de Estado.” In 2010, Gutiérrez announced the end of his long-running show “Libre Encuentro” after 20 years on the air in the U.S. and Guatemala. Gutiérrez’s show helped create an opening for discussions on the welfare of Guatemala at a time when many Latin American countries struggled with similar sociopolitical issues. On September 19, “Razón de Estado” premiered through Guatevisión, marking Gutiérrez’s return to television with his non-profit organization, Fundacion Libertad y Desarollo.

In the first segment of the inaugural episode, Gutiérrez addressed the causes that have prevented Guatemala’s government from solving the most pressing problems affecting its citizens: “Today we are facing the failure of one more government, a government that was unable to see the signs of the times,” Gutiérrez explained, “Instead of strengthening the State, improving the justice system, instilling confidence in the economy… [the President] dedicated himself to hiding his faults and protecting his own interests. “

Gutiérrez also claimed that corruption and impunity have impeded the development of Guatemalan society. “Oblivion has been the traveling companion of corruption; and corruption without justice is impunity; impunity is a source of backwardness and poverty…The moral bankruptcy of delinquents who call themselves politicians are just some of the symptoms of Guatemala’s true tragedy: political underdevelopment.”

In the second segment of the program, Gutiérrez interviewed the former president of Colombia, Andres Pastrana, who spoke about the political context and the problems faced by Colombia before launching “Plan Colombia” and explained that creating an alliance with the United States was key in combating drug trafficking at that time. “The U.S. used the drug and we produced it,” said Pastrana. “We spoke with the U.S. President and asked for the financial support we needed…Plan Colombia became policy there and in the U.S.”

In the final segment, Gutiérrez diagnosed the situation in Guatemala, showing alarming figures of poverty, chronic malnutrition, illiteracy, inequality and high levels of violence. He also mentioned low economic growth, the lack of employment and the consequent migration of millions to the United States in recent decades. He reflected a corruption index that places Guatemala as the fourth most corrupt country in the continent. 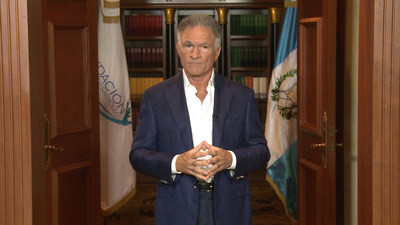