MIAMI, Sept. 10, 2019 /PRNewswire-HISPANIC PR WIRE/ — Over the past year, Mexico has become the main site of the most significant social phenomenon of recent times: Migrant Caravans. The United States has witnessed the arrival of thousands leaving their home countries in search of a better life and has adapted to a new reality at both domestic and international levels. Discovery en Español analyzes the origins of this phenomenon in CARAVANAS, the new documentary premiering September 22 at 9pm E/P in the United States. 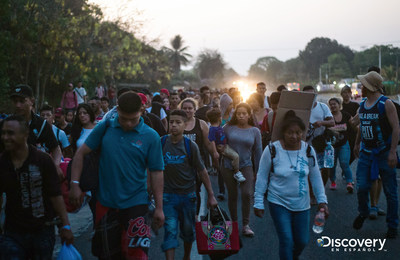 Following the actual route of thousands of people who emigrate from Central America and walk through Mexico to reach the United States, the one-hour special portrays the humanitarian work of Rubén Figueroa, a member of the Mesoamerican Migrant Movement; Gabriela “Gaba” Cortés, Ángeles de la Frontera’s Cultural Activities Coordinator; and Estela Jiménez, an activist and migrants’ supporter. They have all witnessed the caravan drama up close both in Mexico and the United States and have helped migrants fleeing violence and misery in a desperate search for a better life.

CARAVANAS also portrays the story of Daisy, a Honduran mother who travels with her 12-year-old American son to reach the United States. In Tijuana, Daisy and Jimmy meet Gaba who provides them with legal advice and new opportunities, but Daisy must decide if she will separate from her son and send him to the United States by himself.

The documentary also features Juan in his mission to walk through Mexico carrying his seven-year-old girl in his arms. His daughter Lesly suffers from cerebral palsy and is unable to walk but nonetheless Juan is determined to set foot in the United States and Estela Jiménez lends him a hand.

Discovery en Español Presents “CARAVANAS”, the Long Journey of Thousands of Migrants in Search of a Better Life