MIAMI, July 23, 2019 /PRNewswire-HISPANIC PR WIRE/ — Discovery en Español travels to the vast, nearly untouched plains of Tanzania in SERENGUETI, the new innovative series highlighting the majestic animals and their day-to-day lives living together. Created and produced by Emmy®-winner Simon Fuller, and directed and produced by Emmy®-winning wildlife filmmaker John Downer, the six-part series gives unrivaled access to one of the most pristine and unspoiled corners of the Africa. Featuring a lush original score, the groundbreaking production follows the heartwarming stories of a cast of African wildlife over the course of a year, showcasing the dramatic moments that make each day of survival on the Serengeti a feat. 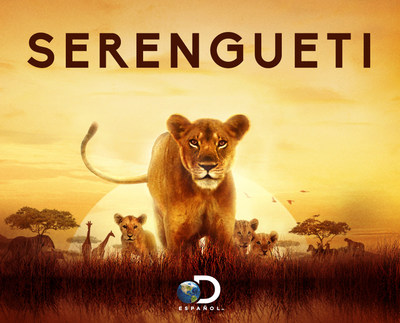 Soon the season of plenty will begin to fade and food will be harder to come by, putting the animals of the Serengeti to the ultimate test. With new arrivals and unexpected problems, old foes resurfacing and dangerous encounters at nearly every turn, the Serengeti will demand courage from all who call it home. In SERENGUETI the world’s most captivating animals try to survive in the beautiful, demanding lands of Northern Africa, stopping at nothing to protect their offspring and prove their worthiness to their tribe.

From Kali the lioness and Shani the Zebra, to Zalika the Hyena and many more, each species has their own unique story, whether dealing with their enemies or desperately searching for prey. Kali makes a big mistake and is now left completely alone to fend for herself and her cubs– an almost impossible task in the African plains. The series also features Tembo, a young male elephant struggling to take the next step on his journey into adulthood, as well as Nalla, the family matriarch juggling to lead the herd and be a mother. Across the Serengeti, Bakari the Baboon looks to honor the memory of his lost love by fiercely protecting her orphaned child. SERENGUETI gives viewers a front row seat to witness how the animal experience isn’t so different from our own.

Collaborating for the first time, Fuller and Downer worked together on SERENGUETI for several years. Using a photographic and highly stylistic approach, their team employed innovative filming techniques in some of Africa’s most treasured regions, painting the ultimate portrait of survival in this region. Set to the backdrop of original music by Will Gregory with vocals by artists such as Lola Lennox, this television experience combines Africa’s unimaginable beauty with its equally unforgiving brutality, highlighting daily challenges of life on the Serengeti.

This landmark series is created and produced by Fuller and directed and produced by Downer. Nancy Daniels and Howard Swartz serve as executive producers for Discovery. It was made by XIX Entertainment and John Downer Productions and commissioned for BBC TV by Tom McDonald, Head of Commissioning, Natural History and Specialist Factual.