TORONTO, July 15, 2018 /PRNewswire-HISPANIC PR WIRE/ — Continuing his mid-season charge towards a possible fifth championship, Scott Dixon took control of the Honda Indy Toronto on Lap 33 of the 85-lap contest, and went on to score his third victory of 2018 and take a 62-point lead in the fight for the title. 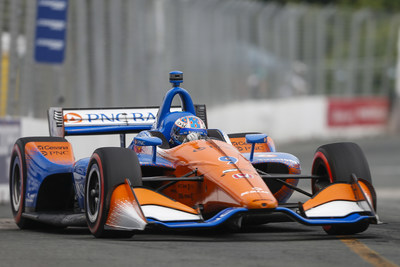 Starting second, Dixon trailed early leader Josef Newgarden through the first round of pit stops.  Then, on a Lap 33 restart following a full-course caution, Newgarden slid into the barriers lining the 1.786-mile street circuit.  Dixon was quick to take advantage, and moved into a lead he would only surrender during the remaining routine pit stops, taking the lead for good on Lap 59.

Dixon’s 44th career win, behind only Indy car legends A.J. Foyt [67] and Mario Andretti [52], gives him 464 points after 12 of 17 races.  Newgarden, who recovered to finish ninth, is second in the standings with 402 points.  Honda’s seventh win of the season gives it an unofficial 135-point lead [1,017-882] over rival Chevrolet in the chase for the Manufacturers’ Championship.

Toronto-area natives Robert Wickens and James Hinchcliffe gave their hometown fans a pair of drivers to celebrate today.  Wickens finished third after a battle with second-place Simon Pagenaud that saw the pair make contact at least twice in the closing laps.  His Schmidt Peterson Motorsports teammate, Hinchcliffe, last week’s winner at Iowa Speedway, prevailed in a similar battle with fellow Honda driver Marco Andretti when the latter was forced to pit for a splash of fuel at the start of the final lap.  Andretti would recover to finish 10th.

Zach Veach recorded the second-best result of his rookie season with a seventh-place finish for Andretti Autosport.  Teammate Alexander Rossi recovered to finish eighth after making no fewer than six pit stops as a result of multiple instances of contact during the race.

Video recaps from this weekend’s Honda IndyCar Series racing activities in Toronto are available on the “Honda Racing/HPD” YouTube channel. Produced by the Carolinas Production Group, the video packages can be found at: https://www.youtube.com/HondaRacingHPDTV.

After back-to-back race weekends in Iowa and Toronto, the Verizon IndyCar Series now takes a week off before returning to one of Honda’s “home” events, the July 29 Honda Indy 200 at the Mid-Ohio Sports Car Course.  With multiple Honda manufacturing, corporate and R&D facilities, thousands of Honda associates will be on hand to cheer for their favorite Honda IndyCar drivers.

Scott Dixon (Chip Ganassi Racing Honda) Started 2nd, finished 1st; 3rd IndyCar Series win of the season for Dixon, 7th for Honda: “”I’m worn out, man, it was definitely a physical race. The car was superb. We just needed some clean air and we were able to check out [from the rest of the field].  It was definitely a tough race, definitely tough on the restarts. We just have to keep these [championship] points rolling.  Huge congrats to the Chip Ganassi team, and Honda. I’m stoked. This is awesome.”

Robert Wickens (Schmidt Peterson Motorsports Honda) Started 10th, finished 3rd: “We had a great car in the race. I don’t think anyone had anything for Scott [Dixon] today. He was kind of in a class of his own, but to go punch for punch with him in the second stint…I thought we really showed some great strides [for the team]. Thankfully I’m not an overly teary guy, but that [finishing on the podium in Canada] was really cool. I can’t thank these Toronto fans enough. I mean this whole week has been such a whirlwind of emotions, and to stand on the podium in my first professional home race, I couldn’t ask for anything better.”

Art St. Cyr (President, Honda Performance Development) on today’s Honda IndyCar Series win in Toronto: “That was a hard-fought race, with many championship contenders having issues.  Except Scott Dixon.  He was disappointed for failing to win the pole in qualifying yesterday, but was clearly the dominant car and driver combination this weekend.  It was great to win here today in front of all our friends from Honda Canada, and all credit to the excellent runs for Canadian favorites Robert Wickens and James Hinchcliffe.  Scott gave his championship hopes a big boost today, and we’re all looking forward to returning to another of our ‘home’ tracks in two weeks for the Honda 200 at the Mid-Ohio Sports Car Course.”

United Ways of California Helps Californians Count Down to July 15...