LEXINGTON, Ohio, July 28, 2019 /PRNewswire-HISPANIC PR WIRE/ — The “Master of Mid-Ohio”, Scott Dixon, scored his sixth Honda Indy 200 victory Sunday, dominating the middle stage of the 90-lap contest and then holding off teammate Felix Rosenqvist on fading tires in the closing laps, taking the checkers by the narrow margin of 0.0934 seconds.  Ryan Hunter-Reay completed a 1-2-3 sweep for Honda, finishing third, and his Andretti Autosport teammate Alexander Rossi closed to within 16 points of championship leader Josef Newgarden with a fifth-place finish. 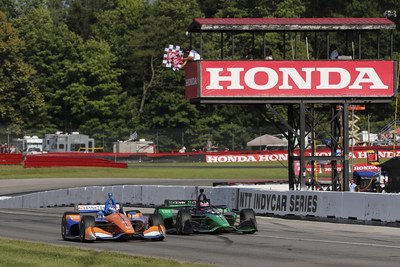 Starting eighth on the hard-compound Firestone “Black” sidewall tires, Dixon’s Chip Ganassi Racing team was one of only three to successfully execute a two-pit-stop strategy.  Not pitting until Lap 30, Dixon then ran the soft-compound “Red” sidewall tires to build a massive 12.5-second lead on the field by Lap 50.  However, his team elected to run a second set of Red tires for the third and final stint of the race, and Dixon’s lead began to shrink rapidly in the final 15 laps.

In the closing laps, Dixon had to deal with both a group of lapped cars attempting to unlap themselves, and rapidly closing rivals Rosenqvist, Hunter-Reay and Newgarden.  On the final lap, Dixon and Rosenqvist made light contact in Turn 2, while Hunter-Reay and Newgarden had harder contact exiting the corner, sending Newgarden into the gravel trap and a 11th-place finish.  Rosenqvist continued to challenge his teammate throughout the rest of the lap, but came up just short at the finish.  Still, second-place is his best finish in his rookie IndyCar Series season and his first podium result.

Hunter-Reay survived the last-lap contact with Newgarden to finish third, his second podium of the year and first since the Circuit of the Americas.  While not figuring in the battle for the win, Rossi’s fifth-place finish was his 10th top-five result of 2019, as he continues to battle Newgarden for the IndyCar Drivers’ Championship.

Social media content and video links from this weekend’s IndyCar Series action from the Honda Indy 200 are available on the HPD Facebook (https://www.facebook.com/HondaRacingHPD) and Twitter (https://twitter.com/HondaRacing_HPD) channels.  Produced by the Carolinas Production Group, YouTube video packages can be found at: https://www.youtube.com/HondaRacingHPDTV.

Next
The NTT IndyCar Series now takes two weeks off before the final super-speedway race of the 2019 season, the August 18 ABC Supply Co., Inc., Pocono 500, at the unique, 2.5-mile tri-oval Pocono Raceway in Long Pond, PA.

Quotes
Scott Dixon (Chip Ganassi Racing Honda) Started eighth, finished first, second win of 2019, 46th career IndyCar win, sixth win at Mid-Ohio: “Oh man, that was crazy.  I feel a little bit bad for [teammate] Felix [Rosenqvist], we had to put some moves on him for sure during the last few laps. I had nothing else I could do. If I wasn’t his teammate, I think he’d had me off!  But a lot of respect there.  But Felix is going to have a ton of wins [in his career].   We went too aggressive running a second set of [softer, alternate Firestone] ‘Reds’, but they held up at the end.  Huge credit to the PNC team and Honda.  They did a phenomenal job strategy-wise and making the car better for the race.  This really helps our run for the championship, so just really proud we got it done today.”

Felix Rosenqvist (Chip Ganassi Racing Honda) Started sixth, finished second, best finish in rookie IndyCar Series season, first podium finish: “Chip [Ganassi, team owner] lets us race [for the win], and that was the right thing to do.  That was a good couple of [final] laps there.  First, I had to get through the lapped traffic, and then I had to get to Scott [Dixon].  There was a little bit of a misunderstanding on the last lap, and we touched a little bit, but we raced hard and fair for the last couple of corners.  I almost got him there, but in the end it’s a fantastic podium for Chip Ganassi Racing.”

Ryan Hunter-Reay (Andretti Autosport Honda) Started tenth, finished third to complete Honda 1-2-3 podium sweep: “We were really pushing hard there at the end, and to see how quickly we were closing on [Scott] Dixon and [Felix] Rosenqvist, I thought, man, this could go anybody’s way. Amazing strategy from this #28 DHL Honda team. We were closing in on these guys. Obviously, congrats to Ganassi [Racing]. They ran a great race, good strategy, and we were closing on them, but just came up a little bit short.  If we keep knocking on the door like that, we’ll win plenty. It was nice to just get back on form where we should be.”

Ted Klaus (President, Honda Performance Development) on today’s Honda IndyCar Series win at Mid-Ohio: “What a great day for Honda Racing worldwide.  On top of this morning’s thrilling Formula One victory, we had a heart-stopping 1-2-3 sweep here at the Honda Indy 200, our second IndyCar Series podium sweep of the season.  We appreciate the great turnout and support from all of our Ohio-based associates today; and sincerely hope that all Honda associates share our joy and pride in these successes.”