ELKHART LAKE, Wisconsin, June 25, 2017 /PRNewswire-HISPANIC PR WIRE/ — Scott Dixon provided a master class in Verizon IndyCar Series racecraft on Sunday at Road America, taking charge of the Kohler Grand Prix midway through the 220-mile contest and fending off all challengers to claim his first victory of 2017, and the sixth of the year for Honda. 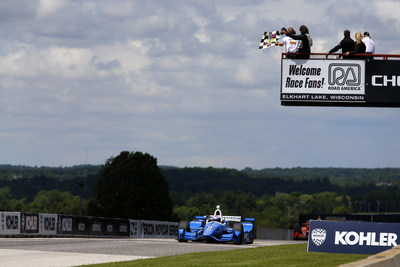 Dixon pushed his Chip Ganassi Racing Honda from fifth on the grid to third in the opening stint of the 55-lap race, and stayed out for one additional lap during the second run to gain another position.  Dixon then passed Josef Newgarden of Team Penske for the lead on a Lap 31 restart.  Except for turning over the lead to teammate Charlie Kimball for a single lap in an exchange of pit stops on Lap 43, Dixon remained in control for the rest of the race, despite fierce pressure from Newgarden in the closing laps.

The victory was the first of the year for Dixon, but the 41st of his career, moving him to within one win of tying Michael Andretti for third in career Indy car victories.  It also extends his lead in the 2017 IndyCar Series Drivers’ Championship, with 379 points to 345 points for defending champion Simon Pagenaud.

In addition to leading a lap and running in the lead group throughout the contest, Kimball also had his best result of the season with a sixth-place run in his Chip Ganassi Racing Honda.  Ed Jones continued his impressive rookie season with Dale Coyne Racing with a seventh-place finish.  Graham Rahal worked an “off-sequence,” four-pit-stop strategy to his best advantage to finish eighth, with Max Chilton ninth and Mikhail Aleshin – despite missing Friday practice due to a travel Visa issue – rounding out the top 10.

Video recaps from this weekend’s Honda IndyCar Series racing activities Road America, as well as Acura Motorsports action in the Pirelli World Challenge and at the Pikes Peak International Hill Climb, are available on the “Honda Racing/HPD” YouTube channel. Produced by the Carolinas Production Group, the video packages can be found at: https://www.youtube.com/HondaRacingHPDTV.

After a weekend at the longest track on the Verizon IndyCar Series schedule, and championship next returns to the shortest, the Iowa Speedway oval, for the July 9 Iowa Corn 300.

Scott Dixon (Chip Ganassi Racing Honda) Started 5th, Finished 1st, 1st Indy car win of 2017, 41st career victory: “The NTT DATA car has really had pace all weekend. The Penske cars definitely had something figured out this weekend, and we knew we were going to have a battle on our hands. Then we missed the morning warmup today [due to a] a fuel pressure issue. The team worked hard to fix the car, but it was a bit of an unknown for the race.  But it held up. We had great [race] strategy and great pace today.  I couldn’t be happier for the team. We had a few races earlier this year that I felt got away from us, so this feels good and it’s good for us in the [championship] points.”

Charlie Kimball (Chip Ganassi Racing Honda) Started 10th, finished 6th: “A really solid day for the Novo Nordisk Chip Ganassi Racing team. We had really good pace and really good fuel mileage on the first two stints. That third stint, I don’t think I managed the Firestone alternates [softer compound tires] as well as some of the guys around me. That was disappointing, because I think we could have maybe had a shot at a top five. Overall, though, to fight off some competitors for that last stint, after the final yellow, felt good and it felt good to bring it home in sixth. Pretty happy with it. Big congrats to [teammate] Scott Dixon. What a way to celebrate [team managing director] Mike Hull’s 25th anniversary with the team and get Honda and Chip Ganassi Racing their first win after coming back together this season.”

Art St. Cyr (President, Honda Performance Development) on today’s Honda victory:  “Scott sure drove an awesome race!  Both his race craft and speed were on full display today.  Congratulations to Scott and the entire Chip Ganassi team.  We now have six victories this year, and at least one from each of our teams.  I believe that speaks to the strength of our 2017 lineup and it is extremely gratifying.  This is a testament to the skill of our teams and the hard work from everyone at HPD.  Let’s keep this momentum going into Iowa.”

Dixon Does It! Pilots His Honda to Victory at Road America