ANN ARBOR, Mich., Nov. 16, 2021 /PRNewswire/ — While Domino’s (NYSE:DPZ) is the largest pizza company in the world, it is actually made up of stores owned by hundreds of independent franchise owners, with more than 95% of them starting as Domino’s delivery drivers or pizza makers. They know how hard it is to run a business, and they see the impact that substantial fees from delivery app services have on small restaurants. In recent weeks four Domino’s franchisees and one corporate-owned store have helped some beloved local establishments impacted by delivery fees. 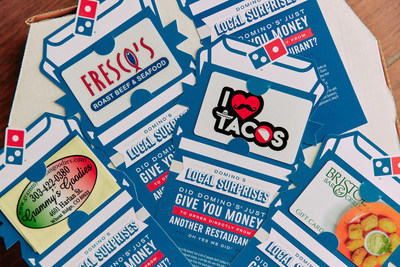 Participating Domino’s stores across the Greater Boston, Phoenix, Louisville, Laredo and Denver areas bought thousands of $50 gift cards from local restaurants, randomly gave them out to Domino’s delivery customers, and encouraged them to use the gift cards by ordering directly from the local restaurants so they could avoid delivery app fees. These local Domino’s stores gave away more than $100,000 worth of gift cards from locally owned grills, taco places, barbeque joints, bakeries, delis and more, to roughly 2,600 customers throughout early November.

“Running a restaurant is tough. Our franchisees benefit from being part of a brand that has operations and technology built for delivery,” said Russell Weiner, chief operating officer of Domino’s. “However, many small restaurants don’t have a system for delivery. Meanwhile, third-party delivery apps are charging local eateries high fees to deliver, which are taking away much of their earnings. Domino’s and its franchisees were inspired to pay it forward in these communities by helping drive business to a few neighboring restaurants – without the substantial fees.”

“We love that Domino’s has supported other restaurants and driven their customers to these mom and pops that could really use the help,” said Irene Li, owner of Mei Mei in Boston, Massachusetts.

Domino’s is committed to supporting the local restaurants and people that make our communities vibrant. If you’re not getting Domino’s, skip the delivery apps and order directly from a local restaurant. To hear from some of these small restaurant owners and learn more about Domino’s surprise gift cards, click here.

About Domino’s Pizza®
Founded in 1960, Domino’s Pizza is the largest pizza company in the world, with a significant business in both delivery and carryout pizza. It ranks among the world’s top public restaurant brands with a global enterprise of more than 18,300 stores in over 90 markets. Domino’s had global retail sales of over $16.1 billion in 2020, with nearly $8.3 billion in the U.S. and over $7.8 billion internationally.

In the third quarter of 2021, Domino’s had global retail sales of nearly $4.1 billion, with nearly $2.0 billion in the U.S. and over $2.1 billion internationally. Its system is comprised of independent franchise owners who accounted for 98% of Domino’s stores as of the end of the third quarter of 2021. Emphasis on technology innovation helped Domino’s achieve more than half of all global retail sales in 2020 from digital channels. In the U.S., Domino’s generated more than 70% of sales in 2020 via digital channels and has developed several innovative ordering platforms, including those for Google Home, Facebook Messenger, Apple Watch, Amazon Echo, Twitter and more. In 2019, Domino’s announced a partnership with Nuro to further its exploration and testing of autonomous pizza delivery. In mid-2020, Domino’s launched a new way to order contactless carryout nationwide – via Domino’s Carside Delivery®, which customers can choose when placing a prepaid online order. 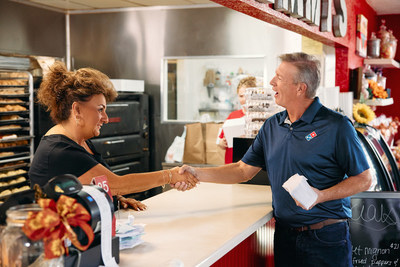