NASHVILLE, Tennessee, May 14, 2018 /PRNewswire-HISPANIC PR WIRE/ — The IUPAT, District Council 91 represents hard working people across four states covering Indiana, Kentucky, Tennessee, and Illinois in the construction industry. We raise our collective voices today alongside local community and labor groups to urge Tennessee Governor Bill Haslam (TN-R) to veto House Bill 2315, which would empower local law enforcement agents on all levels to act as immigration agents and undermines our current constitutional requirement to obtain a judicial warrant of ICE before turning over individuals for deportation. 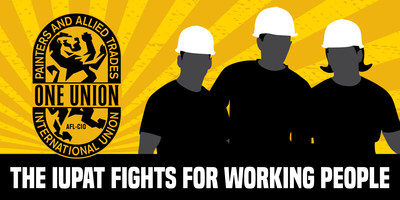 This bill, we believe, will create an environment of fear that unscrupulous employers will abuse to continue exploiting workers and undermine their rights to organize into a union in addition. Every 9 hours in the South, a construction worker dies at their workplace, legislation such as HB 2315 will only increase the number of deaths in our industry. Construction workers across our state face deplorable and unsafe working conditions at the hands of employers that devalue lives and threaten their workforce with deportation to evade responsibility. Furthermore, the state risks losing a skilled workforce as we experience sweeping worker shortages across the development boom underway—this is something neither our industry nor communities can afford.

We urge Governor Haslam to veto the bill within 10 days of it arriving at his office and stand on the right side of history by keeping this bill from becoming an unjust law.

“This is not just an immigration issue, but a labor rights issue as well. Our current immigration system is broken and until there is a just federal solution, we cannot allow local laws to persecute hardworking people. As Labor unions, it is our responsibility to fully represent all members and work towards opening our doors to future members that may be affected by this bill if signed into law—we must prioritize the safety and livelihoods of workers everywhere if we are to truly uphold our American values of prosperity.” – Roger Hester, IUPAT District 91 Director of Business Development

The International Union of Painters and Allied Trades, District Council 91 covers the entire State of Indiana, the western half of Kentucky and middle Tennessee, with some territory in southeastern Illinois. Our membership consists of trades such as Painters, Drywall Finishers, Vinyl Hangers, Glaziers as well as Hydroblasting, Bill Posters, manufacture glass products, and industrial workers who perform fireproofing and lead or asbestos abatement including mold and mildew remediation.