ENSENADA, Mexico, June 13, 2021 /PRNewswire-HISPANIC PR WIRE/ — The Honda Off-Road Racing Team returned to Baja California this weekend, and continued its string of Baja 500 successes with another Class 7 victory at the iconic off-road race.  The impressive result was the fourth consecutive class win for the Ridgeline Baja Race Truck, and the fifth for the Honda Ridgeline in the last six years. 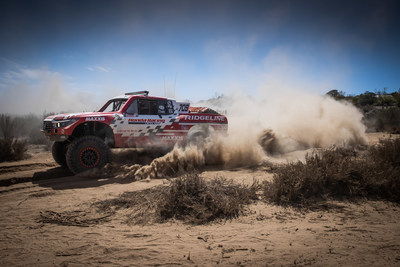 Once again competing in Class 7, for unlimited V6-powered race trucks, the Honda Ridgeline duo of team owner/driver Jeff Proctor and Pat Dailey faced a single-loop course of 466 miles, starting and ending in the coastal city of Ensenada.  A total of 243 entries took part in this year’s 25th running of the event.

Quote
Jeff Proctor (team owner/driver Ridgeline Baja Race Truck) won Class 7 for unlimited V6 Trucks; fourth consecutive Baja 500 race win for Honda: “This was a very fast, yet very technical Baja 500, demanding as always. It was extremely dusty, with many single-track lines that didn’t really allow for passing.  But the entire Honda Off-Road Racing Team was on fire today, thanks once again to everyone for all of their effort and hard work, it all paid off for us once again.”

Next
The Honda Off-Road Racing Team next travels to the desert of Nevada for the 25th anniversary Maxxis Tires “Casey Folks” Vegas to Reno off-road race, August 11-15, starting in Las Vegas and running north to Reno, Nevada.