BROOKVILLE, New York, Oct. 17, 2018 /PRNewswire-HISPANIC PR WIRE/ — Award-winning artist Dana Gluckstein will be on campus for the Oct. 18th premiere of her powerful exhibition titled “DIGNITY: Tribes in Transition.” Her remarkable exhibit chronicles her decades spent photographing Indigenous Peoples as they struggle to maintain their identity in a changing world. The exhibition highlights the Long Island University’s new Steinberg Museum of Art, which recently underwent a $1.2 million renovation. 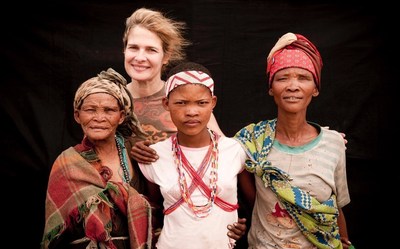 “It’s my sincere wish that DIGNITY will serve as a call-to-action in support of all Indigenous Peoples,” said Gluckstein, shown here with three generations of San women. Her DIGNITY advocacy campaign in association with Amnesty International created a tipping point for President Barack Obama to endorse the United Nations Declaration on the Rights of Indigenous Peoples in 2010. For more information about Dana Gluckstein, go to www.danagluckstein.com.

“We’re thrilled to present compelling photographs by Dana Gluckstein as we introduce our newly renovated Steinberg Museum of Art,” said Barbara Applegate, museum director. “We invite Long Islanders to be inspired by our unique visible storage suite that makes viewing our collection of 5,000 objects feel limitless.”

“DIGNITY: Tribes in Transition” opens October 18, 2018  and runs until March 8, 2019. Dana Gluckstein will speak on opening night and sign copies of her book. There will be a preview for members of the media at 11 a.m. and a VIP preview reception with the artist at 5:30 p.m. The show will open to the public at 7 p.m. The Steinberg Museum of Art is on the ground floor of the B. Davis Schwartz Memorial Library, 720 Northern Boulevard, Brookville, NY 11548.