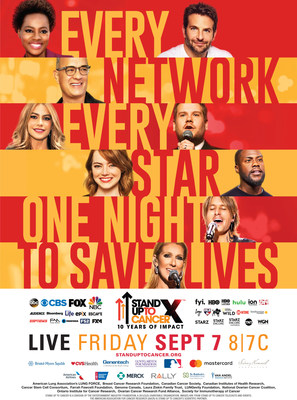 Bradley Cooper, Academy Award®-nominated actor, will return as co-executive producer along with the renowned live-event producing team Done + Dusted, working again with the Stand Up To Cancer production team, after a successful partnership for the 2016 telecast.

“It was truly inspiring to be part of the 2016 Stand Up To Cancer telecast and to stand beside Mitch Carbon, whose life was saved by participating in a clinical trial,” said SU2C Co-Executive Producer Bradley Cooper. “I am proud to return as co-executive producer to highlight the ten years of impact Stand Up To Cancer has made in cancer research.” Carbon, a pediatric cancer survivor, benefited from treatment he received in an SU2C-St. Baldrick’s Foundation Pediatric Cancer Dream Team clinical trial.

Following five historic fundraising telecasts, the 2018 telecast is especially significant for SU2C, as it will commemorate ten years of raising awareness and funds for groundbreaking cancer research that is helping to save lives now.

More than $480 million has been pledged over the past ten years in support of SU2C’s innovative cancer research. Work by SU2C researchers has contributed to FDA approval of five new cancer treatments.

The organization has brought together more than 1,500 of the best scientists from over 180 leading institutions to work together on 24 of Stand Up To Cancer’s signature “Dream Teams,” among a total of 79 team science grants and awards, whose research is aimed at ending cancer’s reign as a leading cause of death worldwide. SU2C-funded researchers have planned, launched or completed more than 180 clinical trials involving over 12,000 patients.

SU2C’s vast scientific program is overseen by a blue-ribbon Scientific Advisory Committee of top researchers, and most grants are administered by SU2C’s Scientific Partner, the American Association for Cancer Research (AACR), the world’s first and largest professional organization dedicated to advancing cancer research.

“Ten years ago, a group of women who were honestly hell-bent on making a difference in the fight against cancer came together,” said Katie Couric. “I never imagined we’d be able to look back at the past decade and see the concept of scientists working together in new ways take off as it has. We are closer than we’ve ever been to realizing a world where everyone diagnosed with cancer can be a long-term survivor. I am excited about how much more we will be able to do for patients over the next 10 years.”

“We are so grateful to the scores of broadcast and cable networks that continue to stand with us,” said Sherry Lansing, the former chair and current member of the Entertainment Industry Foundation (EIF) board and a co-founder of Stand Up To Cancer. “Their support is a springboard that helps SU2C engage major donors as well as countless individuals who give what they can to help stop cancer in its tracks.”

In addition to Couric and Lansing, current members of the SU2C Council of Founders and Advisors (CFA) include Lisa Paulsen, Rusty Robertson, Sue Schwartz, Pamela Oas Williams, Ellen Ziffren, and Kathleen Lobb. The late Noreen Fraser and the late Laura Ziskin, who executive-produced both the 2008 and 2010 telecasts, were also SU2C co-founders. SU2C was formally launched on May 27, 2008. Sung Poblete, Ph.D., R.N., has served as SU2C’s president since 2011.

“The Done + Dusted family is super thrilled to partner once again with our friends at Stand Up To Cancer and our amazing co-executive producer, Bradley Cooper. The SU2C roadblock is the biggest of its kind and is a remarkable platform for bringing together the worlds of science and entertainment in a harmonious collaboration to spread the message and raise funds for groundbreaking cancer research. I was truly humbled by my involvement two years ago. Watch the show and get engaged,” said Hamish Hamilton, director and executive producer at Done + Dusted.  Hamilton directed the Super Bowl 50 Halftime Show starring Justin Timberlake, Lady Gaga and many others, and has received two BAFTA Awards, a Peabody Award, and both Grammy and Emmy Award nominations.

“Stand Up To Cancer continues to represent the best dollar spent on cancer research in this country,” said Phillip A. Sharp, Ph.D., the MIT molecular biologist who is chairman of the SU2C Scientific Advisory Committee. “The teamwork and collaboration that characterizes SU2C research is critical to our efforts to change cancer as we know it.” Sharp received the Nobel Prize for medicine or physiology in 1993 for his discoveries about RNA.

“We’re incredibly fortunate to be able to harness the resources of the whole entertainment community to generate support for our scientists’ innovative research, in order to get new treatments to the patients who so desperately need them,” said SU2C President and CEO Sung Poblete, Ph.D., R.N.

The Canadian Cancer Society (CCS) and the Canadian Institutes of Health Research (CIHR) are actively collaborating with SU2C Canada. CCS is also a collaborator in the inaugural Stand Up To Cancer Canada – Canadian Cancer Society Breast Cancer Dream Team, along with the Ontario Institute for Cancer Research (OICR).  Collaborators in the inaugural Stand Up To Cancer Canada Cancer Stem Cell Dream Team include CIHR; Cancer Stem Cell Consortium; Genome Canada, and OICR. AstraZeneca Canada and MasterCard are the first corporate supporters of SU2C Canada.

About Stand Up To Cancer

Stand Up To Cancer (SU2C) raises funds to accelerate the pace of research to get new therapies to patients quickly and save lives now. SU2C, a division of the Entertainment Industry Foundation (EIF), a 501(c)(3) charitable organization, was established in 2008 by film and media leaders who utilize the industry’s resources to engage the public in supporting a new, collaborative model of cancer research, and to increase awareness about cancer prevention as well as progress being made in the fight against the disease. As SU2C’s scientific partner, the American Association for Cancer Research (AACR) and a Scientific Advisory Committee led by Nobel Laureate Phillip A. Sharp, Ph.D., conduct rigorous, competitive review processes to identify the best research proposals to recommend for funding, oversee grants administration, and provide expert review of research progress.

For more information on Stand Up To Cancer, visit www.StandUpToCancer.org.

About the Entertainment Industry Foundation

Founded in 1942, the Entertainment Industry Foundation (EIF) is a multifaceted organization that occupies a unique place in the world of philanthropy. By mobilizing and leveraging the powerful voice and creative talents of the entertainment industry, as well as cultivating the support of organizations (public and private) and philanthropists committed to social responsibility, EIF builds awareness and raises funds, developing and enhancing programs on the local, national and global level that facilitate positive social change. For more information, visit www.eifoundation.org.

About the American Association for Cancer Research

Founded in 1907, the American Association for Cancer Research (AACR) is the world’s first and largest professional organization dedicated to advancing cancer research and its mission to prevent and cure cancer. AACR membership includes more than 40,000 laboratory, translational, and clinical researchers; population scientists; other health care professionals; and patient advocates residing in 120 countries. The AACR marshals the full spectrum of expertise of the cancer community to accelerate progress in the prevention, biology, diagnosis, and treatment of cancer by annually convening more than 30 conferences and educational workshops, the largest of which is the AACR Annual Meeting with more than 22,600 attendees. In addition, the AACR publishes eight prestigious, peer-reviewed scientific journals and a magazine for cancer survivors, patients, and their caregivers. The AACR funds meritorious research directly as well as in cooperation with numerous cancer organizations. As the Scientific Partner of Stand Up To Cancer, the AACR provides expert peer review, grants administration, and scientific oversight of team science and individual investigator grants in cancer research that have the potential for near-term patient benefit. The AACR actively communicates with legislators and other policymakers about the value of cancer research and related biomedical science in saving lives from cancer. For more information about the AACR, visit www.AACR.org. 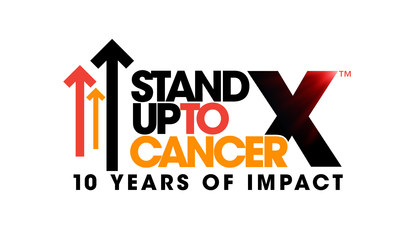 Stand Up To Cancer to Return on Friday, September 7 for Sixth Star-Studded Roadblock Telecast