SPEEDWAY, Indiana, May 21, 2017 /PRNewswire-HISPANIC PR WIRE/ — In a thrilling conclusion today to qualifying for next Sunday’s Indianapolis 500, Scott Dixon drove his Chip Ganassi Racing Honda to a four-lap average speed of 232.164 mph to score his third Indy 500 pole, and the 10th for Honda in the last 17 years. 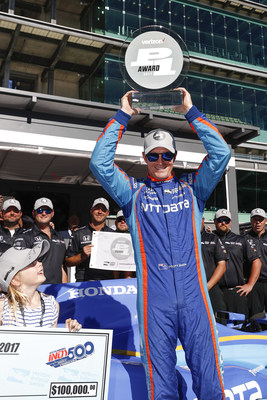 Dixon’s pole run, the fastest since Arie Luyendyk’s effort in 1996, capped a great day for Honda at the famed “Brickyard”, as the manufacturer claimed four of the top five starting positions for the 101st running of the Indy 500 on May 28, and seven of the top 10.

Defending race winner Alexander Rossi will start on the outside of the front row, third, in his Andretti Autosport Honda.  The second “row of three” will include Rossi’s Andretti teammates Takuma Sato, fourth, and two-time Formula One world champion Fernando Alonso, fifth in his Indy 500 debut.

Sebastien Bourdais, injured in a hard Turn 1 crash in Saturday’s first-round qualifying, continues to recover after undergoing successful surgery at IU Health Methodist Hospital for fractures to his hip and pelvis.  The Dale Coyne Racing driver will be replaced by two-time previous “500” starter James Davison.

Scott Dixon (#9 Chip Ganassi Racing Honda) pole qualifier, his third Indianapolis 500 pole: “I thought maybe the dashboard had broken and brought up a fake number [on his first lap of 232.595 mph]!  We seriously didn’t expect to see the speed that we did.  It was a big day for us. Obviously, this is the pole. I have to give a shout out to Sebastien Bourdais, too, as I saw him this morning, and he’s doing well. He’s a teammate with me in the Ford GT program. We’ve spent a lot of time together over the years, and he’s a hell of a driver. So, I wish him well. I know he’s going to be on the mend quickly and hopefully, he can be in a car here very soon. Today, we managed to get it done and we’re starting in the right place [first]. The hard part now is to keep it there. We’ve been fortunate enough to have support from NTT DATA to this point this season, and we’re really looking forward to having Camping World come on board for the 500 for race week.”

Fernando Alonso (#29 McLaren Honda-Andretti Autosport Honda) will start his first Indianapolis 500 from fifth, fastest rookie: “The car was on the limit.  I don’t know if it was possible to be on pole position, but definitely very close. I had an overboost problem on Lap 2 out of the last corner, and it was like hitting the brakes. I went one gear down and started again picking up the speed.  I crossed the line and I thought it was 225 mph or something.  I nearly came to the pit lane, because [I thought] ‘this qualifying run is over’ with this problem. [But I kept] running, still putting the laps together, and then I was happily surprised with the [final speed].  I feel good, I feel great. Obviously, this is the biggest race in the world, and it felt that way from the very beginning.  But now, with the weekend and you pick up the speed and you feel even more and more with the fans coming for qualifying now. This is a very special event.”

Art St. Cyr (President, Honda Performance Development) on today’s performance in qualifying: “It’s a good day when you can qualify in 14 of the top 17 positions for the most important race of the year.  This two-day qualifying format is very stressful, but it shows that Honda is well positioned for a strong race next Sunday.  Congratulations to Scott for a well-deserved pole, and a special call-out to the entire Andretti Autosport organization, for taking five of the top 10 grid positions. Best wishes for a speedy recovery to Sebastien Bourdais, who almost certainly would have been a contender for the pole today.  It’s good to know he came through surgery with flying colors and we hope to see him back at the track very soon.”