DUBAI, United Arab Emirates, June 21, 2022 /PRNewswire-HISPANIC PR WIRE/ — The sparkling Dubai skyline shimmered as a backdrop to the top ranked and only seven star hotel in the world, the famed Burj Al Arab as one hundred and fifty world world leaders, business dignitaries and celebrities came together for one of the top sustainability galas in the world. The De Brabandt Foundation Annual Gala in support of The Dubai Turtle Rehabilitation Center, featured speeches by leaders such as His Excellence Sheikh Fahim Al Qasimi, live performances by world-famous live acts like Jasmine Thompson ‘Ain’t Nobody’ and a special presentation by Augusto Valverde, host and founder of Global Child “Travel with Purpose” ranked as the top travel show in the world. 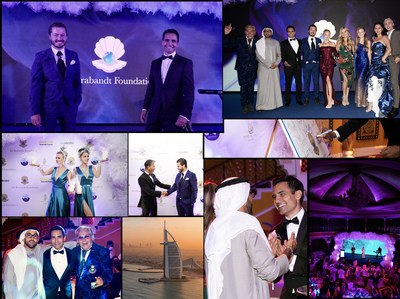 “We don’t inherit the Earth from our ancestors, we borrow it from our children…” declared Augusto as he addressed the dignitaries. “Travel with Purpose is leaving places better than we found them, it means we take a some of our time and resources to impact the people and destinations in a positive way.” He went on to thank Laurent De Brabandt, the charismatic founder and leader of the De Brabandt Foundation who organized and funded such a meaningful event at the Al Falak Ballroom.

“We have a shared responsibility to the next generations to create a more sustainable future for destinations; for their communities, ecosphere and travelers alike.” Said Laurent, who has supported this project that has already rehabilitated around 2000 critically endangered sea turtles and is the most successful of it’s kind in the Middle East.

“We’ve been so impressed with the magnificent work that Laurent and his family have accomplished through their foundation, that we’d like to announce we’ll be featuring their work during future episodes of Global Child “Travel with Purpose!” announced Augusto to a loud round of applause.

“The people and resources represented in this room can change the world. My job is to be of service to you, to help amplify your giving and sustainable projects. If we don’t take action, then the world remains the same. Why do we Travel with Purpose? So one day we can look at our children and know… that we have made them proud. Thank you…” Said a smiling Augusto as he walked off the stage.