NEWTON, Iowa, July 8, 2018 /PRNewswire/ — Making the correct calls throughout ever-changing track conditions, James Hinchcliffe worked his way to the front of the Verizon IndyCar Series field, then dominated the final 50 laps to win Sunday’s Iowa Corn 300 at Iowa Speedway. The win is the first for Hinchcliffe in 2018, and the sixth for Honda. 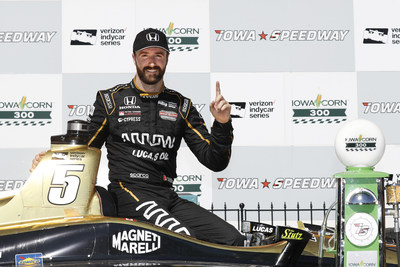 Starting 11th after a brief slide during his qualifying run on Saturday, Hinchcliffe gained seven positions in the first 35 laps around the 7/8th-mile Iowa oval, the shortest track on the IndyCar Series schedule.  He worked his way up to second by the first round of scheduled pit stops, and remained among the leaders as he and his Schmidt Peterson Motorsports team made adjustments to compensate for hotter conditions throughout the race.

Following the final round of pit stops on Lap 224, Hinchcliffe rapidly chased down race leaders Josef Newgarden and Spencer Pigot, taking the lead on Lap 256 and pulling away to a seven-second lead over the field on Lap 285.  Contact on Lap 294 between a sliding Ed Carpenter and Takuma Sato resulted in the race ending under the caution flag, but with Hinchliffe still 2.6 seconds clear of the field at the checkers.

Despite the light contact with Carpenter, Sato completed his own charge in the final 50 laps to finish third, his best finish since winning the Indianapolis 500 in 2017.  Completing a near-perfect day for Schmidt Peterson Motorsports, Hinchcliffe’s rookie teammate, Robert Wickens, finished fifth.

Video recaps from this weekend’s Honda IndyCar Series racing activities in Iowa – as well as Acura Motorsports action from Canadian Tire Motorsports Park – are available on the “Honda Racing/HPD” YouTube channel. Produced by the Carolinas Production Group, the video packages can be found at: https://www.youtube.com/HondaRacingHPDTV.

Next week, the Verizon IndyCar Series returns to one of the most popular stops on the schedule at the July 15 Honda Indy Toronto, which will be contested on a temporary street circuit on the grounds of Exhibition Place in downtown Toronto, Ontario, Canada.

James Hinchcliffe (Schmidt Peterson Motorsports Honda) Started 11th, finished 1st; 6th career win; 6th Honda IndyCar Series win of 2018: “A very good day. The best day. You know, it’s so nice to be back up top after the month of May that we had [not qualifying for the Indianapolis 500]. But we’ve had a couple good [race] weekends in a row now, strong performances from the whole team, and we kind of felt some momentum coming in here.  We didn’t qualify particularly well, had a bit of a problem. But we got through a bunch of cars in that first stint, [then] got through a couple more in the pit cycle. Then, at that last [pit] stop, the Arrow crew just nailed it, gave us a really good change, and the car just came alive. I was able to put it wherever I needed to get through traffic, and the reason I was able to catch Josef [Newgarden] and ultimately get by him was just our ability through traffic.  I can’t thank the guys enough for such a great car and great job in the pits. Overall, it was a great result for the Arrow car and for Schmidt Peterson Motorsports in general.”

Takuma Sato (Rahal Letterman Lanigan Racing Honda) Started 10th, finished 3rd: “Yeah, I’m really, really pleased. In fact, Spencer [Pigot] and I had a lot of great, side-by-side racing, but I think we respected each other all the time. I think we gave a great show for the fans, put on a really good race. For me particularly, obviously I’m very happy to be on the podium, but this was a great achievement from Rahal Letterman Lanigan Racing. We really struggled [early in the race weekend], but I think all the engineers did a fantastic job improving the car, and in the end, I think we pulled a really great car. So, a big ‘thank you’ to the whole team, the No. 30 car was fantastic today.”

Art St. Cyr (President, Honda Performance Development) on today’s Honda IndyCar Series win at Iowa Speedway: “This was an interesting result that attests to the unpredictable character of Iowa Speedway.  The [setup] changes that James [Hinchcliffe] and his Schmidt Peterson Motorsports team made during the race demonstrated [team owners] Sam Schmidt’s and Ric Peterson’s commitment to building a championship-caliber team.  The fifth-place finish for [teammate] Robert Wickens is just further proof of the advancements made by SPM this year.  Also, congrats are in order to Takuma and Rahal Letterman Lanigan Racing for his best result since winning Indianapolis in 2017, and to everyone at HPD for another exciting Indy car victory today.”