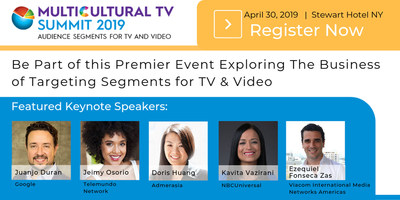 Producer, Joe Schramm said, “We are thrilled to present this line-up of speakers from the business of television for viewers defined by ethnicity, nationality, age, gender or sexual identification.”

One featured conversation on broadcast television includes two station group owners Ravi Kapur, Founder/CEO of Diya TV and Dujuan McCoy, Owner and CEO of Bayou City Broadcasting. They will discuss how broadcast “digi-nets” are giving ethnic channels a fresh opportunity, while another session featuring Joseph Lawson of Verizon and Bernarda Duarte at Roku focuses on the challenges of distributing content direct-to-consumer.

A session focused on diversity on the screen is moderated by Ann Carlsen of Carlsen Resources and features Mary Ellen Holden from the Geena Davis Institute on Gender in Media, Cathy Yee, CEO of Incluvie, and Joan Baker and Rudy Gaskins of the Society of Voice Arts and Sciences. Another session on content marketing includes former HBO Boxing executive, Mark Taffet, who now promotes women’s boxing, Sean Saylor, Head of Creative Services at Viacom Americas, Marc Bland, VP of Diversity and Inclusion at IHS Markit, Denise L. Bennett from Content Partnerships at Warner Media and Alberto Marzan, Founder and CEO of AfroLife.TV. Other speakers throughout the day include; Doris Vogelmann at Vme; Luis Torres-Bohl, Castalia Communications, and Burke Berendes from Condista.

The conference kicks-off with a lunchtime reflection by Sean Cunningham, President and CEO of the Video Advertising Bureau (VAB) in memorial recognition of two industry leaders, Cynthia Perkins Roberts of VAB and Pam Ford of NCTA. This is followed by the announcement of the 2019 Vision Awards recipients by A. Shuanise Washington, President & CEO for NAMIC, the National Association for Multi-Ethnicity in Communications. The Awards recognize original programming that reflects the lives, spirit and contributions of people of color.

Schramm concluded by saying, “This summit is the most cost-effective way for TV executives to get quick insights into the value of diversity to their business.”  For more information about the Summit or to register, please visit https://www.multiculturaltvsummit.com/.

About Schramm Marketing Group
Schramm is a marketing agency that specializes in targeting multicultural or segmented audiences, ticket sales promotions, sponsorship sales and the production of conferences for the television and video industry. The company is recognized for its expertise for attracting large, sold-out crowds for international soccer, for driving pay TV subscription sales, for securing top brands as sponsors of sports events and business conferences as well as developing the agenda and content for popular business conferences.

Schramm created and produces the Hispanic Television Summit as well as other internationally-recognized conferences. Schramm also programs sessions for NAB Show and is the core programmer for NAB Show New York.  Schramm’s clients include the leading brands in sports, television, entertainment, telecommunications, and non-profits.  For more information, visit www.schrammnyc.com.