NEW YORK, Sept. 11, 2019 /PRNewswire-HISPANIC PR WIRE/ — This year’s award recipients have been announced for the 17th Annual Hispanic Television Summit which will be presented by two leading business publications for the television industry, Broadcasting & Cable and Multichannel News on Wednesday, October 30, 2019 at The Westin New York at Times Square.  The awards will honor a popular television program, a leading brand, a network executive and two business owners. 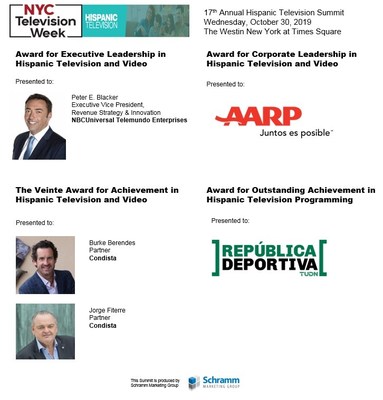 Univision’s long-running, popular sports program, Republica Deportiva, which this year is celebrating its 20th anniversary, will be honored with the Award for Outstanding Achievement in Hispanic Television Programming.  Juan Carlos Rodriguez, Univision’s President of Sports, and Federico Lariño, Univision’s SVP of Sports Entertainment will join Republica Deportiva co-host Félix Fernández to accept the award on behalf of the program’s producers, cast and crew, past and present.  AARP will be recognized for its many years of commitment to maturing Latino consumers with the Award for Corporate Leadership in Hispanic Television and Video.  Yvette Peña, AARP’s Vice President of Multicultural Leadership will accept the award on behalf of her company.  The Award for Executive Leadership in Hispanic Television and Video will be presented to Peter E. Blacker, EVP of Revenue Strategy & Innovation at NBCUniversal Telemundo Enterprises for his years at the forefront of developing, delivering and monetizing content for the changing Hispanic audience, and the Veinte Award for Achievement in Hispanic Television and Video will honor both partners of Condista, Burke Berendes and Jorge Fiterre in recognition of their twenty years as pioneers in the business of content representation for the Hispanic market.

The prestigious awards are presented annually at the Hispanic Television Summit during the Awards Luncheon, which is sponsored by NBCUniversal Hispanic Group.

“The awards luncheon is always one of the highlights of the Hispanic Television Summit,” said conference producer Joe Schramm, Managing Partner and President of Schramm Marketing Group.  He continued, “The awards enhance the overall experience for our hundreds of attendees which also includes fresh and topical panel sessions and keynote conversations.  In the coming weeks, we will have more exciting announcements about this year’s compelling line-up.”

The Hispanic Television Summit is the premier event for those in the business of television and video for Hispanic audiences in the U.S. and worldwide. It has been produced for all seventeen years by Schramm Marketing Group on behalf of Broadcasting & Cable and Multichannel News.  This year, these publications are including the Hispanic Television Summit as one of four topical tracks within their NYC Television Week. In addition to the Hispanic TV track, the other three topical tracks are: Advanced Advertising, Streaming and TV Data at The Westin New York at Times Square.

Schramm added, “Now is the best time to get the best savings by using our special savings promo code.  Save an additional $200 off the “early bird” rate when you register for the Hispanic TV Summit.  Simply send an email to HTS@schrammnyc.com and receive an automatic response with the promo code already applied to the online registration link.”

Schramm is an experienced agency that specializes in marketing to multicultural or segmented audiences, ticket sales promotions, sponsorship sales and the production of conferences for the television and video industry. The company is recognized for its expertise for attracting large, sold-out crowds for international soccer, for driving pay TV subscription sales, for securing top brands as sponsors of sports events and business conferences as well as developing the agenda and content for popular business conferences.

Schramm created and produces the Hispanic Television Summit as well as other internationally-recognized conferences.  Schramm’s clients include the leading brands in sports, television, entertainment, telecommunications, and non-profits.  For more information, visit www.schrammnyc.com.