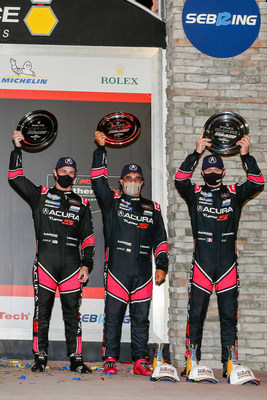 Today’s race was marked by multiple incidents and a trio of heavy crashes, but all without serious driver injury.  When the green flag waved for the final restart with just under 30 minutes remaining, Cameron powered his Acura past the similar ARX-05 of Wayne Taylor Racing to claim third place and the first podium result for Meyer Shank Racing since the team returned to prototype competition after back-to-back GTD championships for Acura in 2019-20.

Earlier in the day, Wayne Taylor Racing appeared to be in contention for a second consecutive 2021 victory, but the season-opening Rolex 24 race winners Sebring hopes were dashed – four hours into the 12-hour contest – by contact with a GTD car, resulting in damage and a loss of coolant in the right-side intercooler of the ARX-05.  The driver lineup of Filipe Albuquerque, Ricky Taylor and Alexander Rossi persevered despite the resulting loss of power, and their fourth place finish keeps them in the thick of the DPi championship battle.

Acura NSX GT3 Evo
In the production-based GTD division, the Magnus with Archangel’s NSX GT3 Evo driven by Andy Lally, John Potter and Spencer Pumpelly had a steady run through the first seven hours, then picked up pace as the circuit cooled in the later afternoon and into the night, beginning a long battle with the Porsche of Team Hardpoint-EBM for a possible podium result.  In the final minutes, while fighting for third place, Katherine Legge in the Porsche made contact with Lally’s Acura, sending the NSX briefly off track and resulting in a fourth-place finish.  Legge would finish fifth after being penalized for the contact.

Quotes
Dane Cameron (#60 Meyer Shank Racing ARX-05) finished 3rd with co-drivers Olivier Pla and Juan Pablo Montoya: “There always seems to be a final lap ‘shootout’ under the lights at Sebring, and tonight was no exception. I had a good final restart and made up a position.  But we were just a little bit off on the balance all race, and in the end didn’t have quite enough [for the victory]. We were kind of hanging on, so I think we got the most out of what we had in terms of pace, and the team did a really good job all day, really good strategy and quick pit stops throughout so, we made some good strides and it’s nice to get a podium here for Acura and Meyer Shank Racing in their return to prototypes.”

Ricky Taylor (#10 Konica Minolta Wayne Taylor Racing Acura ARX-05) finished fourth with co-drivers Filipe Albuquerque and Alexander Rossi: “It was really looking like a good day until the damage we had [following contact with a GTD car]. I think the whole Konica Minolta Wayne Taylor Racing team did a really nice job preparing the car with the end of the race in mind.  Man, the car was handling so well at the end, it’s just a shame with the damage we sustained, we were fighting without a full-powered Acura after [the contact]. The bright side is we took away some decent [championship] points [for finishing fourth], and a lot of our main rivals were behind us. On that note, we can go back to Mid-Ohio, for Acura’s home-town race and try and go four-for-four for Acura.” [Acura teams and drivers have won the last three Acura Sports Car Challenge events at the Mid-Ohio Sports Car Course.]

John Potter (#44 Magnus with Archangel Acura NSX GT3 Evo) finished 4th in GTD with co-drivers Andy Lally and Spencer Pumpelly: “You know, we’re feeling great!  We came here knowing that this track hasn’t always been favorable for the Acura NSX GT3, so we’re really excited to show the consistency this car has, to bring home a fourth-place finish, and survive all the carnage that claimed a lot of our competitors today.  We were expecting just a ‘points-paying’ finish, but we got some really good championship points, so we’re really happy.”

David Salters (President, Honda Performance Development) on today’s race at Sebring: “I guess it’s a good thing to be disappointed with third- and fourth-place results. But the competition at this level is so tight, that you have to have a perfect day to win. It was an exciting race at the end for the fans, and we’re pleased to see Acura take another podium in DPi here, and contest for a podium in GTD. It was a tricky race, in constantly changing conditions that presented a variety of challenges for our teams.  Our teams and drivers gave it their all, as always, and even though we had some problems with contact in both classes, delivered the best possible results on the day.”

Next
After starting the 2021 season with a pair of endurance contests in Florida, the WeatherTech SportsCar Championship now takes an eight-week break before resuming with the Acura Sports Car Challenge at Mid-Ohio, May 14-16 at the Mid-Ohio Sports Car Course. 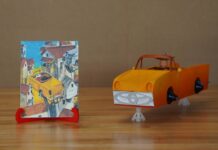 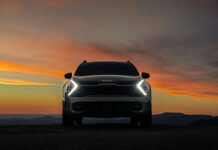 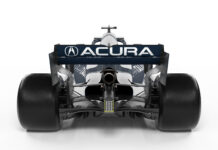 Acura Returns to Formula 1 Racing for the U.S. Grand Prix 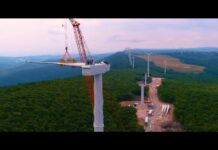 ‘The Power of Solar & Wind – the Road to Carbon Neutrality’ to Air on Discovery, Science Channel, MotorTrend TV 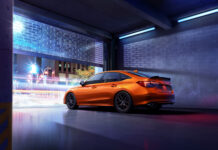 Podium Finish for Acura at Sebring