PHOENIX, Sept. 20, 2019 /PRNewswire-HISPANIC PR WIRE/ — During Hispanic Heritage Month, we celebrate culture, customs, and the achievements of Latinos living in the United States. For the second consecutive year, FUD (which stands for Fine, Unique, and Delicious) is recognizing a group of Latinos as “Real Hispanic Heroes” for their inspiring success stories and efforts to improve themselves and their communities. 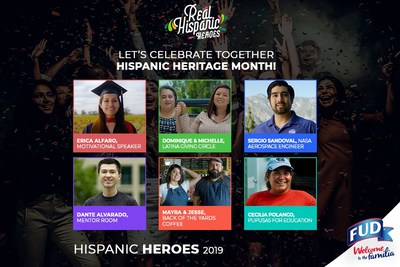 FUD, a brand owned by Sigma, was born in Mexico nearly 70 years ago. In the late 90’s, FUD began to expand its reach into the U.S. by marketing meat and cheese products.

“FUD is a Hispanic brand and we know the challenges of reaching a culturally different country, of adapting to the circumstances, because we have experienced these situations and that is why we want to acknowledge these heroes,” says Rafael Amezcua, member of the marketing team at FUD in the U.S.

Sergio Sandoval is one of the Real Hispanic Heroes recognized by FUD. Sergio is a NASA Aerospace Engineer who works at the Jet Propulsion Lab (JPL) in Pasadena, California. To fulfill his dream of reaching the stars, Sergio had to live away from his family and learn a new language and new customs while maintaining his sense of self and Hispanic heritage.

FUD recognizes Sergio because on his journey to achieving his dream of working at NASA, he relied heavily on the support of the Hispanic community. He received the strength and inspiration that motivated him to overcome challenges because he knew he was not alone.

“NASA is not a U.S. organization, NASA is world organization, because everything we discover changes textbooks in any country. It is an example of what we can do when we are united,” said Sergio.

To learn more about FUD’s Real Hispanic Heroes of 2019, visit http://www.fudusa.com/heroes and FUD USA on Facebook every week, from September 15th until October 15th.