“I’m not exactly the toughest human being when it comes to crying, but this was one of the most emotional events I’ve done in my career,” said Natale. “As hard as the fight against childhood cancer is, the staff at St. Jude is always looking for ways to bring these kids hope and the promise of better times ahead. This is the heart of Promesa y Esperanza, and I couldn’t be prouder to be a part of it,” she added.

Promesa y Esperanza is an annual seminar that the Memphis institution hosts every January in anticipation to the Latino radiothon that took place February 7 and 8. A collaboration between St. Jude and radio stations across the country, the radiothon has contributed over $150 million to the fight against childhood cancers since 1997.

“We are so thankful for everyone who has rallied around THIS SHIRT SAVES LIVES as we continue to build momentum around this movement,” said Richard Shadyac Jr., President and CEO of ALSAC, the fundraising and awareness organization for St. Jude. “Our Partners in Hope enable us to continue with groundbreaking research and treatment all while keeping our founding promise that families never receive a bill from St. Jude for treatment, travel, housing or food – because all a family should worry about is helping their child live.”

By joining the THIS SHIRT SAVES LIVES fundraising campaign, Natale adds her voice and image to some of the biggest names in media and entertainment including Jennifer Aniston, Morgan Freeman, Sofia Vergara, Jon Bon Jovi, Drew Barrymore, Luis Fonsi, Ludacris, Juanes and many more. The T-shirt, which simply states, “This Shirt Saves Lives,” is available exclusively to those who become Partners in Hope and pledge to give at least $20 per month to the hospital’s lifesaving work.
The movement has grown to encompass hundreds of celebrities, influencers and radio stations as well as thousands of supporters who took to their social channels with #ThisShirtSavesLives images and messages. So far, the effort has reached tens of millions of people across digital channels and helped lead to more than 90,000 monthly donors who have gotten behind the hospital’s mission: Finding Cures. Saving Children.

To join the campaign and get your own THIS SHIRT SAVES LIVES T-shirt visit www.stjude.org/camiseta

ABOUT GABY NATALE
Gaby Natale is a triple Daytime EMMY® winner, TV personality, bestselling author and motivational speaker. She is the executive producer and host of the nationally-syndicated TV show SuperLatina on PBS’ Vme network.

Natale holds a bachelor’s in International Relations and a master’s degree in Journalism from the University of San Andres and Columbia University. Prior to starting her career in television, Natale taught Communication and Journalism courses at the University of Texas. Originally from Argentina, Natale holds triple citizenship from the United States, Argentina and Italy and has lived in the Buenos Aires, London, Washington DC, Mexico and Dallas. 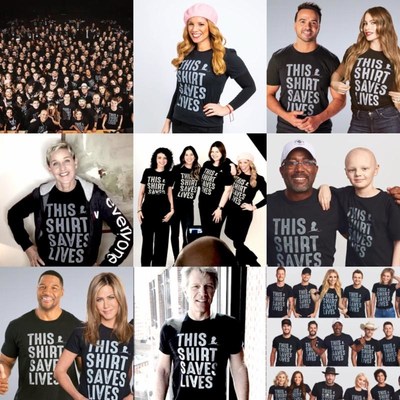