MIAMI, Dec. 6, 2022 /PRNewswire-HISPANIC PR WIRE/ — Loud And Live, the South Florida-based entertainment, marketing and media company, announced today the new tour of the legendary group Gipsy Kings featuring Tonino Baliardo. With more than 20 million albums sold worldwide, two GRAMMY® Awards, and a career of more than 30 years, the Gipsy Kings featuring Tonino Baliardo return to the stages of the United States and Canada in 2023, with their new tour titled “Renaissance”. 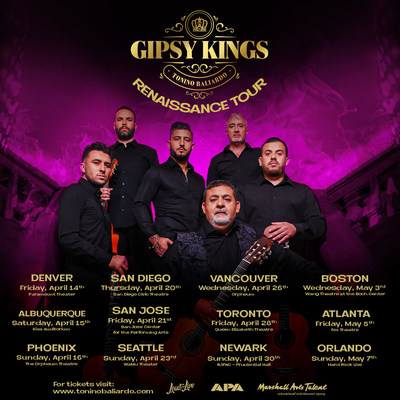 “The impact that the music of the Gipsy Kings had on the world is incalculable. Their Bamboleo is part of our collective DNA,” said Nelson Albareda, two-time Latin GRAMMY® and GRAMMY® Award-winning producer, as well as founder and CEO of the production company, Loud And Live. “This tour is very aptly titled since it will be a rebirth for this magnificent group.”

The tour, which will visit some of the most important cities in the United States and two cities in Canada, will begin in Denver, Colorado on April 14, 2023 and end in Orlando, Florida on May 7, 2023. Renaissance will coincide with the release of their new album. The Renaissance album, their first in eight years, is being hailed as “an album full of gypsy passion and tradition drawn from true gypsy life.”

“Over the years, we have performed in the United States and made many friends on our trips there. We will be playing all the favorites and some new songs as well. I guarantee it will be a wonderful party,” said Tonino Baliardo.

About Loud And Live:
An Entertainment, Marketing, Media & Live Events Company, Loud And Live performs at the intersection of music, sports, lifestyle and content development. Headquartered in Miami with additional offices in San Francisco, Puerto Rico, Mexico and Spain, Loud And Live is driven by its passion to create engaging experiences for global audiences.