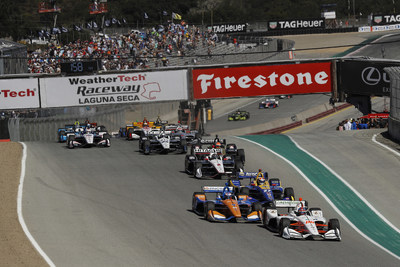 Starting from the pole, Herta led throughout the day, but was pursued for the duration of the 90-lap contest by a series of rivals, including fellow Honda driver Scott Dixon, championship contender Simon Pagenaud and eventual second-place finisher Will Power.  Power provided the strongest challenge to Herta following the final round of pit stops around Lap 65, but the rookie proved up to the task, and held on to take the victory by just over a half second at the checkers.

Just over six seconds behind the lead pair, five-time series champion Dixon battled with Pagenaud throughout the final 25 laps, edging his rival at the finish by 11 one-hundredths of a second to finish third and help secure the Manufacturers’ Championship for Honda by 49 points [1436-1387].  The title is the eighth for Honda in IndyCar Series racing with multi-manufacturer competition, and its second in succession.

Although Herta won twice this season – his first victory coming at Circuit of the Americas in March – Felix Rosenqvist capped his own year of consistent high finishes with a fifth-place result today to claim Rookie of the Year honors.  Rosenqvist had six top-five results this season, including second-place finishes at Mid-Ohio and Portland.

Next
Sunday’s race concludes the 2019 NTT IndyCar Series.  The 2020 season gets underway on March 15 with the Firestone Grand Prix of St. Petersburg, Florida.

Quotes
Colton Herta (Harding Steinbrenner Racing Honda) Started first, finished first, second race win of 2019 in his rookie IndyCar Series season: “It was a tough race. I was either getting hounded by Dixon, or Pagenaud, or Power the whole time, so they definitely didn’t make it easy on me. But yeah, happy to kind of put together what we had in Portland and learn from our mistakes of the tire-wear issues and go forward with it. Whenever you win an IndyCar race, it has to be a perfect race. You can’t really make mistakes and get away with it, just because there’s always two or three other guys on that day that can win. For sure, there were a few guys that could win today, and we just outdid them. We had the pace on them, and we were definitely the best today, so we definitely deserved to win.”

Scott Dixon (Chip Ganassi Racing Honda) Started second, finished third to clinch Honda’s eighth IndyCar Series Manufacturers’ Championship: “The car was by far better on the ‘Red’ [alternate, softer compound] Firestone tires than the black primaries. There was a ton of tire degradation, and it kind of threw us for a loop. It’s a great result for [primary sponsor] PNC Bank; great for Honda winning the Manufacturer title; and great for [teammate] Felix [Rosenqvist] for the Rookie title. It was a hard-fought battle with Simon [Pagenaud] at the end, and I hope it was a good show as we haven’t been back at Laguna Seca for some time.”

Alexander Rossi (Andretti Autosport Honda) Started third, finished sixth, third in the Drivers’ Championship: “I think the ‘blacks’ [harder compound primary tires] were much friendlier for us, which was unfortunate because we started on the used [softer compound] ‘reds’. We made the decision to go opposite of the two cars in front at the start because we knew we were ultimately racing them.  We took a gamble. We were pretty committed to trying to do something different, and if we ended up third swinging, it was better than just being complacent and coming home second.  It was a risk that didn’t pay off, unfortunately, but yeah, it was — it just wasn’t meant to be.”

Felix Rosenqvist (Chip Ganassi Racing Honda) Started 14th, finished fifth, won 2019 IndyCar Series Rookie of the Year honors:  “Today was exciting, with [fellow rookie] Colton [Herta] starting P1 and us in 14th for the Rookie battle. He led almost every lap. We managed to pass a ton of cars and executed perfectly. It’s well-deserved for all the NTT DATA guys on a season-long effort. I think I used a lot of anger from yesterday to move forward [in the race]. It was a great way to finish the season and I can’t wait until next year with this team.”

Ted Klaus (President, Honda Performance Development) on Honda’s championship-winning 2019 IndyCar Series season, second consecutive Manufacturers’ Championship for Honda and eighth in IndyCar Series competition: “This award is shared equally by all of our associates at Honda Performance Development. It is through their unstinting efforts that we now get to share this award with them.  I also want to thank all of our partner teams, each of which contributed to our successful title defense.  A win today from our youngest driver, and newest team, helps demonstrate the overall depth of the Honda Racing effort and bodes well for the future.  We were fortunate to have multiple promising rookies as part of our IndyCar program this year, so congratulations to Felix Rosenqvist for becoming Rookie of the Year.  Thanks to Alexander Rossi and Scott Dixon for again taking the title chase down to the final race of the season, and to all of our drivers for their commitment to excellence.”