NEW YORK, May 3, 2018 /PRNewswire-HISPANIC PR WIRE/ — Eugenio Derbez and his wife Alessandra Rosaldo, one of the most influential couples in the world of Latin entertainment in the United States, grace the cover of the May issue of HOLA! USA magazine. The successful pair of actors tell us all about their love story, their beautiful family and the success they’ve achieved in the mecca of world cinema where they are rapidly creating a powerful dynasty. 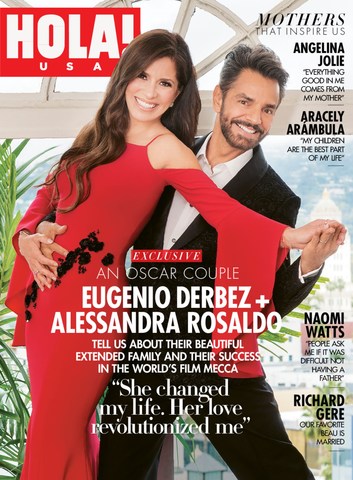 “The parents of little Aitana posed exclusively for HOLA! USA and shared a sincere look into their new life in Los Angeles, and how fame has not changed their main priority: family. Eugenio, who is currently celebrating the release of his latest comedy “Overboard” – which he produced and also stars in alongside talented actresses Anna Faris and Eva Longoria – also has an important new role: he´s now grandfather to little Kailani, the precious first child of his daughter Aislinn and her husband, actor Mauricio Ochmann,” comments Miguel Sirgado, editor in chief of HOLA! USA.

This edition is also dedicated to the inspiring mothers in the entertainment world. Among them, HOLA! USA publishes an interview with Angelina Jolie from Paris in which she speaks in detail about her close relationship with her six children and her dedication to them, her memories of her deceased mother and her passion for philanthropic causes. Actress Naomi Watts speaks candidly about her childhood without a father by her side. In addition, another exemplary mother, Aracely Arámbula, reveals how she juggles her successful career as an actress, presenter and now as a businesswoman between Mexico and Miami, without compromising her daily life with her children, Daniel and Miguel. In addition, she confesses her thoughts about the new successful biographical tv show of Luis Miguel. Meanwhile, the beautiful Ana Patricia Gámez from Despierta América poses exclusively for HOLA! USA at her home, while expecting for her first baby boy. She confesses the ups and downs of her second pregnancy, with her daughter Giuletta and her husband Luis Carlos Martinez.

HOLA! USA also gives exclusive access to Alan Tacher´s home in Miami. The Univision host and his wife Cristina Bernal open the doors of their home for the first time. The couple also presents their second child together, Liam, who was born in February 16, just two days after their third marriage anniversary. Alan discusses the joys of having a large family, and together with the couple’s first-born, little Michelle, and the older children from his first marriage, Hannah, Nicole and Alex, they pose for the first time in exclusive for HOLA! USA.

This issue of HOLA! USA includes full details of the birth of the third child of the Duke and Duchess of Cambridge, William and Kate. Also, just in time for “royal wedding season” and counting down to the long awaited “wedding of the century” between Harry of England and Meghan Markle on May 19th, this edition prepares our readers with full coverage of the sumptuous marriage of Christian of Hannover and Alessandra de Osma. The handsome prince (son of Ernesto Augusto de Hannover, ex-husband of Princess Carolina de Monaco) and the gorgeous fashion designer took their wedding vows in the bride’s native Perú, in a XVII century architectural jewel, during a three day celebration accompanied by European princesses and fashion queens.

And speaking of fashion, this edition of HOLA! USA includes an interview with Chriselle Lim, the powerful influencer who sets the bar on urban trends with her unique style. In an exclusive photo session, she shows us the art of dressing for any occasion during the hottest season of the year.

Founded in 1944, ¡HOLA! Magazine has become one of the world’s leaders in its field. Its long history publishing the best celebrity and royalty photographs has made it an international icon for glamour, informative accuracy and good quality. The Spanish company HELLO! & ¡HOLA! Media, Inc. publishes 30 international editions in 10 languages across five continents. ¡HOLA! reaches 25 million readers worldwide, engages with 24 million unique monthly visitors, has over 13 million social media followers, and is seen by 21.5 million on its broadcast channel, ¡HOLA! TV. 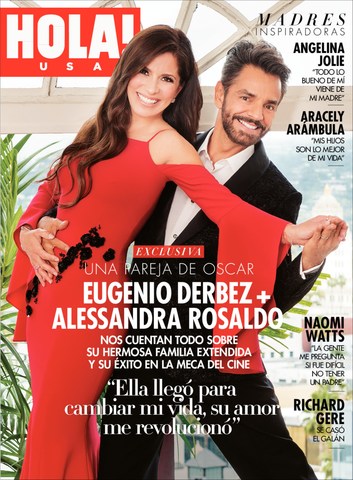