TORRANCE, Calif., April 14, 2021 /PRNewswire-HISPANIC PR WIRE/ — Honda offered the first official exterior look at the production 2022 Civic Sedan today as preparations for the start of mass production near completion at Honda of Canada Mfg. in Alliston, Canada. Previewed last November with the Civic Prototype, the 2022 Civic Sedan is the most fun to drive and technologically advanced sedan in the model’s nearly 50-year history. 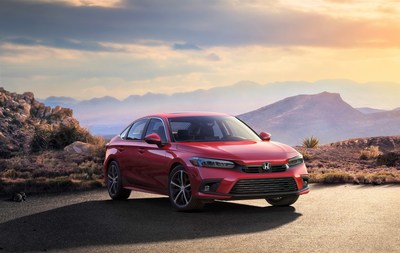 Inspired by the timeless design and human-focused values of past Civics, designers and engineers prioritized Honda’s human-centered design philosophy, which maximizes the total environment for the driver and passengers, while minimizing the space needed for mechanical components. The goal is to increase the driver’s ability to enjoy the car safely. The result is a sporty new look and an all-new simple and sporty interior that advances essential Civic values of uncluttered design, simple ergonomics and exceptional visibility.

As Honda gears up for Civic’s arrival in dealerships this summer, the Honda Civic Tour returns on April 28. For its 20th anniversary, Civic Tour is going virtual this year, with two tour stops. The April 28 headline event will be live streamed on the Live Nation Channel on Twitch and the second stop will be live streamed on the Honda Stage YouTube channel this summer. Starting at 5:00 p.m. PT, the April 28 virtual concert event on Twitch will also give Civic Tour fans a special first look at the all-new 2022 Honda Civic Sedan around 6:00 p.m. PT, leading into the performance.

More information about the all-new Civic Sedan, including photography, video and specifications, will be released on April 28.

Honda offers a full line of clean, safe, fun and connected vehicles sold through more than 1,000 independent U.S. Honda dealers. Honda has the highest fleet average fuel economy and lowest CO2 emissions of any major full-line automaker in America, according to the latest data from the U.S. Environmental Protection Agency (EPA). The Honda lineup includes the Civic, Insight Accord and Clarity series passenger cars, along with the HR-V, CR-V, Passport and Pilot sport utility vehicles, the Ridgeline pickup and the Odyssey minivan. Honda’s electrified vehicle lineup includes the Accord Hybrid, CR-V Hybrid, Insight hybrid-electric sedan, and the Clarity Fuel Cell and Clarity Plug-In Hybrid.

Honda has been producing automobiles in America for over 38 years and currently operates 19 major manufacturing facilities in North America. In 2020, more than 95 percent of all Honda vehicles sold in the U.S. were made in North America, using domestic and globally-sourced parts.

For More Information
Additional media information including detailed pricing features and high-resolution photography of all current Honda models is available at hondanews.com. Consumer information is available at automobiles.honda.com. To join the Honda community on Facebook, visit facebook.com / honda.