TAMPA, Florida, May 15, 2019 /PRNewswire-HISPANIC PR WIRE/ — Sensei José Jiménez Fernández, a fifth dan black belt, is a member of the Cuban Jiu-Jitsu Association. He was born on December 4, 1983, in the city of Havana, Cuba. 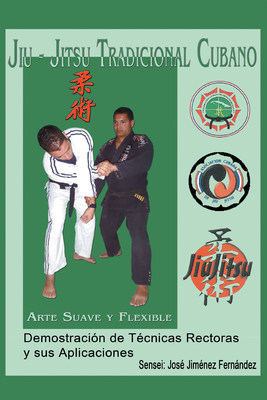 He began practicing jiu-jitsu at the age of six at the Morita Ryu Jiu-Jitsu Academy, with teachers Isaac Hidalgo (now sixth dan) and Alberto Salas (currently eighth Dan). At the age of eleven, he was awarded the blue ribbon by Maestro Eusebio Hidalgo Gómez (currently 9no-dan), who is the founder of this style in Cuba. His incursion in the competitive field within this martial art did not go unnoticed. At the age of fourteen, he obtained the first place in the provincial youth championship and a recognition as the most technical athlete, a success that he repeated in the years 2000 and 2002. In 2002, he became the national champion of elders in the division of 62 kg., a title that he held until his retirement from the competitive circuit in 2004. He participated in the Copa-Cuba in 2003, which took international character where he obtained the bronze medal.

The relevance of this book exposes the academic formation of teaching through the martial art jiu-jitsu, using a method of images and visualization of each technique, whose names and explanations are translated from Japanese to Spanish. In this modest book, the author shows the essence and spirit of the martial art. It takes years for a student to learn each technique and its variants. This requires perseverance, discipline, and the love for the sport.

The author tells us, “I hope that the way of teaching written in this book will please you and that it will be effective to counteract any attack by an enemy. Here are many techniques to subdue and paralyze any attack. I will finish with the motto that i learned from my Master Eusebio Hidalgo Gómez Soke 9no-dan jiu-jitsu: ‘Only those who are not afraid to hold on by their own hands can reach the top.'”

Published by New York City based Page Publishing, José Jiménez’s new book, “Traditional Cuban Jiu-Jitsu,” brings us a guide to get into this martial art, to know its movements and techniques respecting the form and the style of jiu-jitsu.

Readers who wish to experience this instructive and interesting work can purchase “Traditional Cuban Jiu-Jitsu” at bookstores everywhere, or online at the Apple iTunes store, Amazon, Google Play, or Barnes and Noble.

About Page Publishing:
Page Publishing is a traditional New York based full-service publishing house that handles all of the intricacies involved in publishing its authors’ books, including distribution in the world’s largest retail outlets and royalty generation. Page Publishing knows that authors need to be free to create—not bogged down with complicated business issues like eBook conversion, establishing wholesale accounts, insurance, shipping, taxes and the like. Its roster of authors can leave behind these tedious, complex and time-consuming issues, and focus on their passion: writing and creating. Learn more at www.pagepublishing.com.