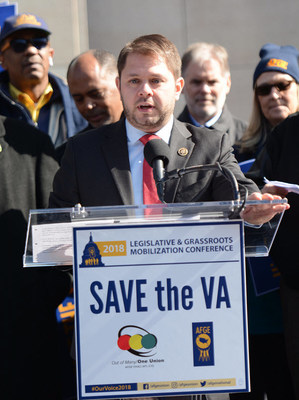 “Congressman Gallego stands with AFGE in supporting the federal workers who keep our government running, including the doctors and nurses caring for veterans like himself at VA hospitals and medical centers in Arizona and across the country,” said American Federation of Government Employees District 12 National Vice President George McCubbin III.

Rep. Gallego has introduced legislation to help veterans struggling with student loan debt and promoted legislation to ensure veterans have access to well-paying jobs. He has led the fight against efforts to privatize the Department of Veterans Affairs and has stood with AFGE members fighting to fully fund and staff the VA.

“Congressman Gallego is a combat veteran who has been fighting to ensure veterans have access to all the benefits they’ve earned, including having their health care delivered by VA doctors and nurses – many of whom are veterans themselves,” McCubbin said.

In February, Rep. Gallego joined with AFGE members and fellow union advocates in calling for filling the VA’s 49,000 vacant positions in a rally outside the AFL-CIO that culminated in a march to the VA headquarters. The congressman recalled how it was an AFGE member at the VA who held his hand when he first returned from Iraq.

“It wasn’t some private soulless corporation,” Gallego said. “It was a dedicated government employee who said, ‘I understand what you’re going through because I’m a veteran myself and I’m here to help you.’ There are thousands, thousands of veterans like me every day who have that relationship with that VA employee, and only that VA employee. That can’t be replaced with some thinktank, Koch brothers, wannabe organization.”

More than 56,000 federal employees live in Arizona – caring for veterans, supporting the military, guarding our borders, and keeping dangerous criminals safely behind bars.

AFGE is the largest federal employee union in the country, representing 700,000 federal and D.C. government workers in all functions of government. District 12 has more than 40,000 dues-paying members in Arizona, California, Hawaii, and Nevada.