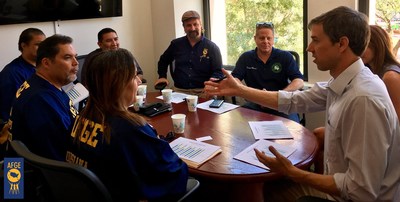 “He bested an eight-term incumbent to win election to Congress in 2012 and has been representing the great people of El Paso for the past six years,” Eliano said. “He’s got what it takes to do it again in November and deliver a Texas-size win to working people in this state.”

Nearly 200,000 federal employees live in Texas – supporting the military, caring for veterans, guarding our borders, and ensuring the safety of the flying public. AFGE has more dues-paying members in Texas than in any other state.

“Texas voters couldn’t have a clearer choice this November,” AFGE National President J. David Cox Sr. said. “They can vote for Beto O’Rourke – a candidate who will stand up to the establishment and reach across party lines to effect real change for working Americans. Or they can settle for the incumbent, a divisive ideologue who orchestrated a 16-day governmentwide shutdown in 2013 that took $24 billion out of the U.S. economy.”

AFGE is the largest federal employee union in the country, representing 700,000 federal and D.C. government workers in all functions of government. District 10 has nearly 45,000 dues-paying members in Louisiana, Mississippi, Texas, New Mexico, and Panama.