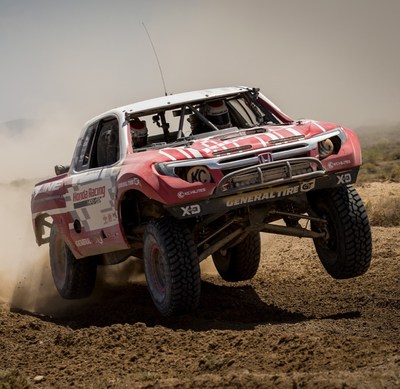 A part of the Best In The Desert series of off-road races, the “V2R” is the longest event of its type in the United States and features a unique set of challenges, including high ambient temperatures, substantial elevation changes and the constant potential of sudden, strong rain storms.  The course is also known for several high-speed sections, stretches of deep silt and thick dust that can make overtaking difficult.

Starting seventh, based on a qualifying draw, in the nine-truck “Class 7200” field, team owner/driver Jeff Proctor and navigator Evan Weller started out at a conservative pace for the first 50 miles, then began to gain positions, moving to first in class at the 88-mile mark.

Continuing to build the lead through the first half of the race, Proctor passed off the driving duties to Pat Dailey for the final 200 miles. This weekend’s victory adds to an impressive total for the Ridgeline Baja Race Truck this season, including class wins at the Parker 425 in February and at the Baja 500 in June.  In addition, the team finished second in its other start this year, at the Mint 400. The Honda Off-Road Racing Team now begins the final prep and logistics for its final race of the year, the Baja 1000 in November.

Jeff Proctor (team owner/driver Ridgeline Baja Race Truck) finished 1st in Class 7200 Unlimited V6 Trucks: “Being patient early in the race and avoiding mistakes in the dust was a key strategy for us today. This is a sweet victory for the entire team and our first at this legendary race. I can’t thank our entire crew enough for all their hard work to get us here.”