DALLAS, Nov. 17, 2021 /PRNewswire-HISPANIC PR WIRE/ — Bestselling author, speaker and 3-time Daytime EMMY winner Gaby Natale has been named as a recipient of the 2021 Maestro Award, the highest distinction given by Latino Leaders Magazine. 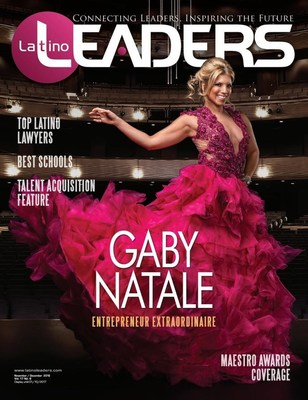 “This is a great honor for me. As a Latina immigrant who started fresh in a new country with no family of connections, I don’t take for granted the privilege to represent our community and elevate our voices. Not everyone knows this, but early in my career I worked as university professor. So, to receive an award named Maestro feels like a full circle. I still have a passion for sharing what I learned along the way. I just now have a much bigger classroom”, explains Natale.

The Maestros, formerly known as the Maestro Awards Ceremony, is a gathering of influential Latino Leaders across the country, intended to recognize and celebrate the achievements of members of the Latino Community. The Maestros have been an institution in the Latino community for nearly 15 years.

Gaby Natale will receive the Maestro of Ultimate Drive. As the first Latina to win 3 Daytime EMMYs back-to-back, the first Hispanic author to be published by HarperCollins’ Leadership division and one of the few foreign-born writers to narrate their audiobook in English, Gaby has had her own share of being “the first like her” in leadership spaces.

“The Maestro Award is the highest honor given by the publication to Latinos who have reached the pinnacle of their professional careers and inspire others to achieve greatness. We celebrate the success stories, accomplishments, and triumphs of many leaders that have made history, and continue to make history, in our community”, explains Jorge Ferraez, Latino Leaders Magazine publisher.

This year’s Dallas maestro awardees include:

The ceremony highlights the histories and past achievements of the awardees and, by way of an interview with Latino Leaders Magazine publisher Jorge Ferraez, focuses on the future of each recipient. To register for the livestream of the upcoming MAESTRO ceremony, click here: https://lnkd.in/e8mGeVgz