ALEXANDRIA, Va., Sept. 1, 2021 /PRNewswire-HISPANIC PR WIRE/ — The COVID-19 pandemic has increased hesitation among women to attend routine, potentially lifesaving cancer screenings, but a recent survey shows their intention to get “back on the books.” 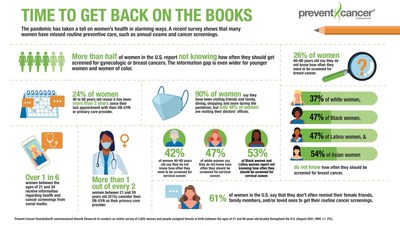 Prevent Cancer Foundation® released an August 2021 survey conducted with 2,003 women and people assigned female at birth between the ages of 21 and 60 years old located throughout the U.S. The survey shows mixed results for long-term cancer prevention.

The Foundation is the only U.S.-based nonprofit organization focused solely on cancer prevention and early detection.

Ninety percent of women say when local pandemic restrictions were lifted, they engaged in normal activities, such as visiting family and friends, dining out and shopping, but only 48% of women visited their doctors’ offices, according to the survey.

The Foundation is encouraging women to prioritize routine preventive care, such as annual exams and cancer screenings.

“With September being Gynecologic Cancer Awareness Month and October being Breast Cancer Awareness Month, there’s an opportunity to place a spotlight on women’s health and increase cancer prevention and early detection,” said Jody Hoyos, president and chief operating officer of the Prevent Cancer Foundation. “We’re hopeful awareness will lead to action and women will get their preventive screenings ‘back on the books.'”

The survey found that 74% of women who received a COVID-19 vaccine were hesitant to visit a doctor’s office during the first year and a half of the pandemic and that 31% of the women who did not schedule a breast or cervical screening say they were worried about being exposed to the coronavirus.

“These cancer screenings are some of the most important steps women can take to take care of their health, including during the pandemic when other obligations may have taken priority,” said Dr. Angela Jones, M.D., FACOG, a board-certified obstetrics and gynecology expert. “Annual doctor visits can play a critical role in detecting cancer early before physical signs or symptoms appear. The earlier cancer is found, the better the odds for successful treatment.”

Women are reporting that they feel more comfortable about scheduling doctors’ appointments now that vaccines for COVID-19 are readily available.

Though the pandemic took a toll on women’s preventive health routines, it was not the only reason for canceled or postponed cancer screenings:

The survey findings suggest an information gap that hinders women from receiving lifesaving preventive health care. Half of women don’t know how often they should be screened for cervical and breast cancers. The numbers are more disconcerting for younger women and women of color.

Half of women in the U.S. between the ages of 21 and 60 don’t know how often they should be screened for cervical cancer. Looking at this by age and race, the numbers show a more detailed picture:

Forty-two percent of women say they don’t know how often they should be screened for breast cancer. Again, the numbers are greater for younger women and women of color:

OB/GYNs provide the key to women getting their routine cancer screenings back on the books, because 43% of women consider their OB/GYN to be their primary care provider. That increases to more than one of every two women, or 51%, among women ages 21 to 39.

OB/GYNs are in a prime position to help women understand the importance of routine cancer screenings, but the survey found that information regarding preventive care needs to extend past the walls of doctors’ offices:

The survey findings also suggest that women could better use their connections with each other to promote their health care activity: 61% of women say they don’t often remind their female friends, family members and loved ones to get routine cancer screenings.

About the Prevent Cancer Foundation®

The Prevent Cancer Foundation® is celebrating 35 years as the only U.S. nonprofit organization focused solely on saving lives across all populations through cancer prevention and early detection. Through research, education, outreach and advocacy, we have helped countless people avoid a cancer diagnosis or detect their cancer early enough to be successfully treated.

The Foundation is rising to meet the challenge of reducing cancer deaths by 40% by 2035. To achieve this, we are committed to investing $20 million for innovative technologies to detect cancer early and advance multi-cancer screening, $10 million to expand cancer screening and vaccination access to medically underserved communities, and $10 million to educate the public about screening and vaccination options. For more information, please visit www.preventcancer.org. 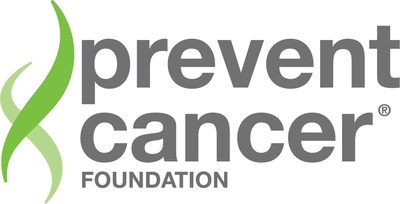 Survey says: Women are skipping cancer screenings during pandemic, but they plan to get ‘back on the books’