TORRANCE, California, May 11, 2018 /PRNewswire-HISPANIC PR WIRE/ — The Honda Civic Tour, a summer staple for music fans, returns this July headlined by multi-GRAMMY nominated singer, songwriter, producer Charlie Puth – with his biggest North American tour to date. The Civic Tour also will feature multiplatinum recording artist and actress Hailee Steinfeld, as a special guest on all tour dates. The 2018 Honda Civic Tour is produced by Live Nation. Now in its 17th year, the Honda Civic Tour officially gets underway July 13 in Boston, MA at the Blue Hills Bank Pavilion, and travels the nation through the summer landing in 30 cities. Due to overwhelming demand, Radio City Music Hall is sold out and a second NY area show in Farmingville, NY has been added on July 14. Tickets for the Farmingville, NY show go on-sale Thursday, May 17. See full tour schedule below. 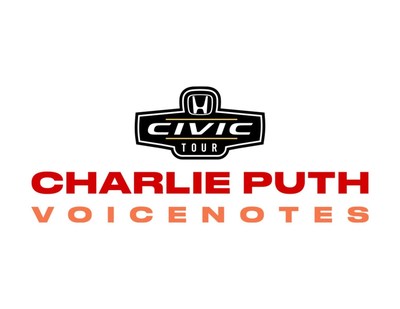 Continuing in the Honda Civic Tour tradition, Charlie Puth will custom design the exterior of a new Honda Civic Type R and Honda Rebel 300 motorcycle that will be displayed for fans at each stop of the 2018 Honda Civic Tour.

Fans also can get behind the scenes access to Charlie Puth through Honda Backstage, a unique behind-the-scenes video series looking at the fascinating stories of up-and-coming artists. Hosted on UPROXX.com and UPROXX’s Facebook page, Honda Backstage includes interviews with the artists sharing their inspirations, obstacles in pursuit of their dreams as they ascend into careers in music. Honda Stage (www.YouTube.com/HondaStage) offers music fans access to custom live and online music programming and performances, artist interviews and more.

Tickets for the 2018 Honda Civic Tour are on sale now. Starting at 10am on May 11 through 10pm on May 18, a special buy one, get one ticket offer will be available at HondaCivicTour.com. A limited number of tickets at all price levels are available while supplies last. For complete details, and ticket information, please see HondaCivicTour.com.

Every track on Voicenotes was produced and written by Charlie himself.  Charlie celebrated the arrival of Voicenotes with a number of release week, national television appearances, performing his current single “Done For Me” on NBC’s “The Voice” and “TODAY.”  Charlie continues his media blitz with a performance of the track on the nationally syndicated “Live with Kelly and Ryan” on May 14.  “Done For Me (feat. Kehlani)” – the third single off of Voicenotes – is currently climbing the top 25 at Top 40 radio and the top 15 at Hot AC.  The album already boasts back-to-back smashes in its now 3x-Platinum certified lead single “Attention” and Platinum certified follow-up “How Long.”  “Attention” marked Charlie’s fifth RIAA-certified platinum selling single, third Billboard Hot 100 Top 10 (peaking at #5), second solo #1 on Hot AC radio, and first solo #1 on Top 40 radio.

In addition to his continued commercial success, Charlie’s new music has found critical acclaim, with The New York Times calling “Attention” one of the best songs of 2017. The song also proved to be a worldwide smash, receiving a remarkable 47 Platinum certifications as well as a Diamond certification in France. In addition to hitting #1 on the European airplay chart, the song went #1 on the airplay charts in France, Italy, Norway, Spain, Sweden, and Switzerland. “How Long” went Top 5 at both Top 40 and Hot AC radio, and was named one of “The 17 Best Pop Songs of 2017″ by Vanity Fair.  Together, the companion videos for “Attention” and “How Long” have logged over 1 billion views on YouTube alone, and can be seen at Charlie’s official YouTube channel – watch HERE.

**Not part of the Honda Civic Tour

With 4.95 million fans having attending Honda Civic Tour concert events since 2001, Civic Tour has established itself as one of the nation’s most compelling, successful music concert tour franchises. Civic Tour offers concert-goers with an exclusive, interactive and engaging concert experience featuring up-close and personal access to their favorite music performers and has done so for over 17 years. Past Civic Tour artists have included One Republic, Demi Lovato and Nick Jonas, One Direction, Maroon 5, and Kelly Clarkson, Linkin Park, Incubus, blink-182 and My Chemical Romance, Paramore, The Black Eyed Peas, Fall Out Boy, Everclear, Good Charlotte and New Found Glory, Dashboard Confessional, and Panic! at the Disco. For news, music, and additional info, please visit HondaCivicTour.com, facebook.com/HondaStage, twitter.com/HondaStage, instagram.com/HondaStage, youtube.com/HondaStage.

Honda offers a full line of reliable, fuel-efficient and fun-to-drive vehicles with advanced safety technologies sold through over 1,000 independent U.S. Honda dealers. The Honda lineup includes the Fit, Civic, Accord and Clarity series passenger cars, along with the HR-V, CR-V and Pilot sport utility vehicles, the Ridgeline pickup and the Odyssey minivan.

Honda has been producing automobiles in America for more than 35 years and currently operates 19 major manufacturing facilities in North America. In 2017 more than 90 percent of all Honda brand vehicles sold in the U.S. were made in North America, using domestic and globally sourced parts.

Building on its deep foundation of bringing music to fans, Honda has brought together an unprecedented group of entertainment and technology leaders, including iHeartMedia, UPROXX, Vevo, Snapchat and Valence Media to produce and distribute some of the best original, high-quality music content available. Honda Stage is a unique combination of live events –  including the Honda Civic Tour and premier music festival partnerships with Austin City Limits and Governor’s Ball –  and exclusive digital content, offering music fans access to custom live and online music programming and performances, artist interviews and more. For more go to www.YouTube.com/HondaStage.

New Jersey-born multi-platinum and multiple GRAMMY® Award-nominated artist, songwriter, and producer Charlie Puth catapulted to superstardom in 2016 at light speed. He maintained this perpetual motion in 2017 with hits “Attention” and “How Long,” the first two singles released from Puth’s highly-anticipated sophomore album, Voicenotes. The album’s first single “Attention” – now 3x-Platinum certified – marked Puth’s third Billboard Hot 100 Top 10 and first #1 on pop radio, cracking 3 million Spotify streams in just a week, with its sexy music video racking up over 3 million views in under 24 hours. The New York Times praised the track as one of “The Best Songs of 2017” while noting upon the release of platinum-certified follow-up “How Long”‘ that “the once tightly controlled pop-soul singer is maturing with a robust second act full of bruises.” The album’s latest single, “Done For Me (feat. Kehlani)” is already beginning its ascent up the pop radio charts. Puth’s RIAA platinum-certified first album NINE TRACK MIND made a remarkable chart debut upon its 2016 release, hitting #5 on Billboard’s Top Current Albums Chart, fueled by the 2x RIAA platinum-certified top 40 smashes, “One Call Away” and “Marvin Gaye (featuring Meghan Trainor),” as well as the 3x RIAA platinum-certified “We Don’t Talk Anymore (featuring Selena Gomez).” A worldwide phenomenon, the debut album reached #1 on iTunes charts in 28 countries around the globe. Puth fully exploded onto the music scene as a songwriter, producer and vocalist on Wiz Khalifa’s “See You Again,” the emotional tribute to Paul Walker in “FURIOUS 7.” The song has officially entered the history books as one of the decade’s biggest singles, topping Billboard’s Hot 100 for a stunning 12 weeks and has become YouTube’s “second most popular video of all-time.” It won two Billboard Music Awards, a Critic’s Choice Award for “Best Song,” a Hollywood Film Award, 2 Teen Choice Awards, a Golden Globe® Award nomination in the category of “Best Original Song” and three GRAMMY® Award nods, including the prestigious “Song of the Year.”