MIAMI, July 1, 2019 /PRNewswire-HISPANIC PR WIRE/ — Discovery en Español presents its US exclusive production, the story of María Isabel Santos (formerly Victoria Henao Escobar and better known as “La Tata”), the widow of world-famous Colombian drug dealer Pablo Escobar Gaviria. The woman, who adopted a new identity, breaks her silence and talks about her life alongside one of the bloodiest men of the 20th century in LA VIUDA DE ESCOBAR, a two-hour revealing documentary premiering July 14 at 9pm E/P and on the Discovery en Español GO app the following day. 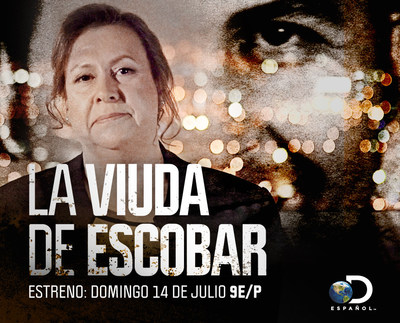 The story of the Escobar Gaviria family is one of the darkest ones ever known. The relationship between its members as well as the mysterious death of its leader and the family’s subsequent escape from Colombia, roused uncertainty and resentment. LA VIUDA DE ESCOBAR is a two-part documentary featuring first-person narrator María Isabel Santos, revealing the intimacy of her relationship with one of Colombia’s most fearful human beings.

At age 24, before becoming an iconic cocaine trafficking figure, Pablo Escobar secretly married a 15-year-old girl whom he affectionately called “Tata”. Escobar was the love of her life and their fates would become eternally linked together.

Twenty-five years after her husband’s death, María breaks the silence she kept out of respect for drug trafficking victims. Now she faces a world divided among those who demonize her accusing her of not stopping her husband from ending so many lives, and those who are more compassionate.

LA VIUDA DE ESCOBAR is a documentary about a woman who wants to find her voice, her life, and her identity. Tata: Pablo Escobar’s victim or accomplice?

About Discovery en Español
Discovery en Español connects Spanish-speaking viewers in the U.S. to the world and all its wonder and possibilities. It provides quality programming focusing on bold storytelling across core genres including adventure, ingenuity, natural history, investigation and current affairs. Created by Discovery Communications, Discovery en Español is widely distributed on Hispanic tier packages throughout the country. Discovery reaches audiences across screens through digital first programming from Discovery VR, over the top offerings Eurosport Player and Dplay, as well as TV Everywhere products comprising the GO portfolio of TVE apps and Discovery K!ds Play. It also reaches audiences across screens on the ”Discovery en Español GO”TV Everywhere app Everywhere (Android: http://bit.ly/2w6Spod iOS:http://apple.co/2fiMNE3). For more information, please follow us on Facebook at facebook.com/discoveryenespanol, Twitter @DiscoveryenESP and Instagram @discoveryenespanol.