SAN FRANCISCO, Aug. 6, 2021 /PRNewswire-HISPANIC PR WIRE/ — Mexicali Resiste, along with members of alcohol industry watchdog Alcohol Justice, joined the global action against #ConstellationBrands at the company’s San Francisco headquarters. They demanded an end to corporate use of public water in Baja, California, and the criminalization of activists for protesting. 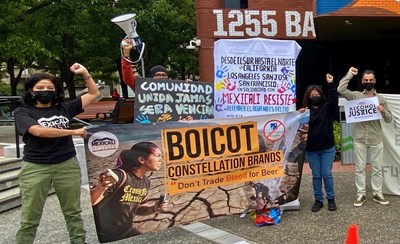 “The people of Baja, California, especially Mexicali, have opposed the looting of water from an overexploited aquifer,” stated Leon Fierro, Diana Arangure, Mexicali Resiste. “It is for this reason that a series of activities have been carried out where the population has expressed its rejection with massive marches, meetings, consultations and collective actions.”

Beginning in January 2017, Mexicali Resiste has opposed Constellation Brands’ plan to build a billion-dollar brewery in the Valley of Mexicali, a region already experiencing severe water scarcity. The factory is expected to annually consume 20 million cubic meters of water (1.4 billion gallons) to make Mexican beer for American consumers. This desert region has an overexploited aquifer fed by the Colorado River with life-threatening water shortages and drought issues already occurring in Tijuana, Tecate, Rosarito and Ensenada.


In 2017 Mexicali Resiste’s advocacy efforts halted legislative efforts to privatize water in Baja California.
Then, in February 2020 the National Human Rights Commission released a report that determined that the process of the approval and installation of the Constellation Brands brewery violated the human right to water, which would lead to the detriment of the population and farmers of the Valley of Mexicali.

In 2020 the Mexican President, Andres Manuel Lopez Obrador called for a “Consultation” for the people of Mexicali to vote to determine the future of Constellation Brands continued operation which resulted in a NO vote, halting the operation. However, the big alcohol company did not give up. The state’s current Governor, Jaime Bonilla, former President of the Otay Water Board in San Diego, CA, supports efforts to allow Constellation Brands to continue operating in Mexicali.

“The government appears to have placed corporate interests above the public’s, so that those of us who are activists and defenders of water are being removed from their path of environmental devastation, said Fierro. On August 10 we have our hearing where they will accuse us of dispossession. It is ironic but it is real, those who want to deprive us are them.”

In 2017 the office of the State Attorney of Baja California determined that accusations against activists did not merit criminal proceedings. However, the current Congress of the State of Baja, California has suddenly decided to reopen the case file and a court hearing is scheduled for August 10, 2021. This decision rescinds the previous resolution and once again presents accusations against the water rights activists for protesting against corporate corruption and injustice. This comes as no surprise after Fierro was wrongfully accused in 2018 of “attempted murder” against police for participating in a protest. However, 20 days later he was freed after it was determined that there was no proof.

“Today we stand in strong support of Mexicali Resite’s 5+ years of defending water rights in Baja California,” stated Bruce Lee Livingston, Executive Director / CEO of Alcohol Justice. “Today we denounce the criminalization of the Mexicali Resiste activists for choosing to protect the quality of life in their community. Today we stand up and fight for justice that chooses people over profit, not just in California and across the country, but worldwide. And today we join Mexicali Resiste in fighting the influence of Big Alcohol that has negatively impacted generations of historically disenfranchised people of color and low-income communities everywhere. We stand together to refuse to allow this impact on generations yet to come! We are united internationally in this effort and today we denounce Constellation Brands for what they are doing in Mexico.”

“We know that organized and united people can overcome any obstacle,” added Fierro.