DETROIT, June 12, 2021 /PRNewswire/ — Taking advantage of a late-race mechanical problem for Will Power, Chip Ganassi Racing’s Marcus Ericsson leapt to the front of the field following the second of two red flag race stoppages to win the opening round of the Detroit Grand Prix NTT INDYCAR SERIES weekend.  The victory is the first for Ericsson, now in his third season of Indy car competition, the third for Chip Ganassi Racing this season and the fifth for Honda. 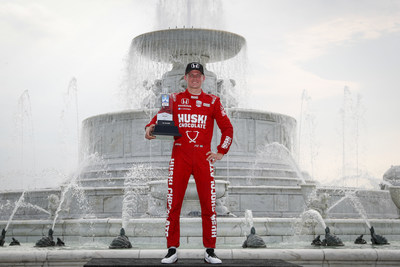 The 70-lap contest was stopped twice, first on Lap 24 for a single-car crash that sent Felix Rosenqvist hard into the Turn 6 retaining wall.  Rosenqvist was alert and conscious following the impact, but was transported to a local hospital for additional evaluation.

Running a close second to race leader Power in the closing laps, a second red flag – for Romain Grojean’s single-car crash – stopped the race with just seven laps remaining.  A mechanical issue for Power prevented him from taking the restart, and Ericsson led the rest of the way to take the checkers by 1.7 seconds over Rinus VeeKay.

Marcus Ericsson (Chip Ganassi Racing Honda) Started 15th, finished first, first career INDYCAR win in his third season with the series: “The team’s done such a great job, the Husky’s Chocolate crew and Honda, everyone on the [timing] stand and in the pits. It’s a team effort.  Obviously, I feel bad for Will [Power, who was unable to take the final restart due to a mechanical issue], but it was my day today.  For once, the luck was on my side and I have to say it was about time!”

Piers Phillips (President, Rahal Letterman Lanigan Racing) On placing three cars in the top six today: “Well, what a day.  We definitely had some challenges in qualifying, so to bring all three cars home fourth, fifth and sixth is a credit to the team. I think it’s a credit to the guys that drove them [Graham Rahal, Takuma Sato and Santino Ferrucci], particularly in the difficult conditions we had today.  But now the focus is on tomorrow [and the second race] and the goal is to finish one-two-three rather than four-five-six.”

Kelvin Fu (Program Director, Honda Performance Development) on today’s Honda win in Detroit: “I guess you can say ‘the red flag giveth, and the red flag taketh away’.  First, and most important, it appears that [Arrow McLaren SP driver] Felix Rosenqvist escaped serious injury in his massive crash. The first red flag [for the Rosenqvist crash] effectively ended the victory chances for several of our drivers, including Scott Dixon and Alexander Rossi.  But the late race stoppage, and Will Power’s subsequent mechanical problem, opened the door for Marcus Ericsson to score an overdue first victory, a great result for Marcus and the #8 Chip Ganassi Racing team. It also is the first victory for HPD’s Nicole Rotondo, trackside engineer for Marcus.”