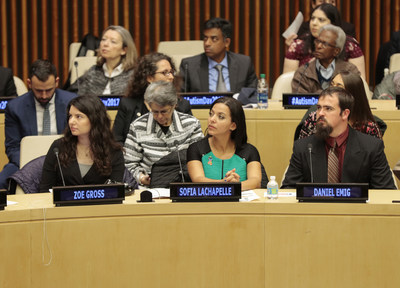 Together with key partners Autism Speaks and Best Buddies International, this new initiative focuses on the de-stigmatization of autism and providing additional support to Latino parents of at-risk children in an effort to increase awareness and decrease delays in diagnosis, shedding light on life-changing and important resources to help Latino families.

“Autism affects 1 in 68 U.S. children over the age of three, yet of those affected, Latino children are less likely to get the proper diagnosis,” said Rocky Egusquiza, Vice President, Community Affairs, NBCUniversal Telemundo Enterprises. “El Poder En Ti is pleased to partner with these expert organizations to ensure our community has the best resources to break down diagnosis barriers for Latino families.”

Sofia Lachapelle, reporter for Telemundo’s “Al Rojo Vivo” and El Poder En Ti autism champion, kicked off the launch by speaking at the United Nations Headquarters’ World Autism Awareness Day in New York on March 31, and will also serve as a personal advocate on the cause. She spoke at the 2017 Autism Speaks Miami Walk on April 2 at the Doral Grand Central Park.  In addition, she will be joining Miami-Dade County Mayor Carlos A. Gimenez at the Main Library to kick off Autism Awareness Month on April 5 and will donate 100 of her children’s book, “Un Superhéroe Especial” (“A Special Superhero”), to the library at the event.

“As a mother of two children with autism, I’m proud NBCUniversal Telemundo Enterprises is committed to bringing awareness on such a critical cause,” said Lachapelle. “Through this new pillar under ‘Tu Salud,’ we hope to inspire parents and families to believe in a better future for their loved ones and access important information on autism.”

Throughout the month of April, “El Poder En Ti” will take part in autism focused events across the country, including New York and Los Angeles.  For more details, key resources and informational videos, visit www.ElPoderEnTi.com/autismo.  Users will also be able to download a bilingual copy of Sofia’s book for free.