PORTLAND, Ore., Sept. 12, 2021 /PRNewswire-HISPANIC PR WIRE/ — Alex Palou led a Honda sweep of the top four finishing positions Sunday at the Grand Prix of Portland, as Honda drivers and teams dominated the finishing order, despite being delayed by a multi-car crash in the opening moments of today’s NTT INDYCAR SERIES event at Portland International Raceway. 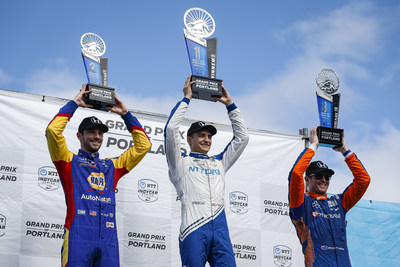 Palou, second-finishing Alexander Rossi, third-place Scott Dixon and Jack Harvey, who rounded out the top four, were all caught up in a multi-car incident seconds after the green flag for today’s 110-lap race, when Felix Rosenqvist overshot the entry to the first turn and tagged Dixon’s left-rear tire, scattering nearly half the 27-car starting field.

All four quickly resumed, but now were in the back half of the field for the restart, leading to the thrilling comeback drives that ensued. Behind the lead four, Honda drivers claimed eight of the top-10 finishing positions with Marcus Ericsson, Colton Herta and Graham Rahal finishing seventh, eighth and 10th, respectively.

Quotes
Alex Palou (Chip Ganassi Racing Honda) Race winner, his third career INDYCAR win and third win of 2021, regains Drivers’ Championship points lead with two races remaining: “I need to see a replay [of the multi-car accident just after the race start], but we kept our head down.  We knew the race was really long, and our strategy was amazing.  HPD gave us the power we needed, and I’m super proud of our partners, and our team.  The whole team was amazing today:  the strategy, the pit stops, everything.  With all the bad luck we had [at the start], we still won. I’m proud about that.”

Alexander Rossi (Andretti Autosport Honda) Started second, finished second: “It wasn’t a win, which is always the goal, but a podium is still a good reward for the team.  It’s been a frustrating year.  Speed has never been the issue, but we haven’t been getting the results and getting it done.  But I think we definitely have had the performance coming back from our summer [three-week] break.  Today was a good boost, and we still have two more to go.”

Wayne Gross (Manager, Trackside Support, Honda Performance Development) on today’s Honda win in Portland: “Today’s result was a great rebound for both Alex [Palou} and HPD after our disappointment two weeks ago in St. Louis [when Palou and Dixon were eliminated in a mid-race crash].  Eight of the top 10 today are Hondas, and we’re looking forward to extending our lead at Laguna Seca with the goal of winning our fourth consecutive manufacturers’ title.  Congratulations to Alex and everyone at Chip Ganassi Racing, and thanks as always to all the hard-working men and women at HPD.”

Next
The NTT INDYCAR SERIES now continues its three-race swing to conclude the 2021 season, moving down the Pacific for next Sunday’s Firestone Grand Prix of Monterey, at WeatherTech Raceway Laguna Seca in Monterey, California.