FRISCO, Texas, Sept. 12, 2018 /PRNewswire-HISPANIC PR WIRE/ — Bestselling author, speaker and TV host Gaby Natale has inked a deal with PepsiCo to empower and inspire the company’s employees as part of its commitment to celebrating diversity during Hispanic Heritage Month. The 3-time Daytime EMMY winner will hold two companywide empowerment keynote speeches at the Dallas Cowboys World Headquarters in Frisco on September 17 and at the Frito Lay Headquarters the next day, which will be telecast to field locations across the United States. 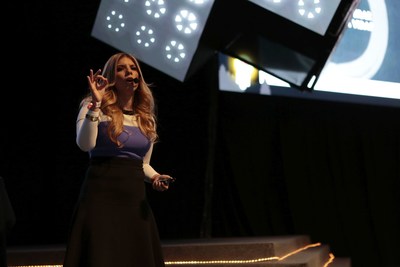 “We at PepsiCo are very excited to have Gaby Natale participate at our Hispanic Heritage Month, where we have many great events planned around our theme, ‘Many Faces, One Culture’. Gaby embodies the spirit of the Hispanic and Latino culture – making great contributions that many can be proud of. As we get closer to celebrating the heritage and culture of our many Hispanic and Latino employees, we look forward to commemorating the month with such an accomplished individual as Gaby Natale,” said Marissa Solis, PepsiCo Vice President and General Manager of the Hispanic Business Unit.

The workshops will flesh out Natale’s renewed commitment to inspire Latinos to develop their potential, powered by the success of her bestselling book El Círculo Virtuoso, which made it to the top of Amazon’s Hot New Releases on the same day it hit the shelves. Equal parts inspirational speech, career workshop and autobiographical manifesto, Natale’s speech will use the arch of her life journey -from a carpet warehouse to the red carpet of the Daytime EMMYs- to start conversation about the challenges and opportunities that Latinos face when they decide to turn their dreams into actions.

“I applaud PepsiCo’s dedication to celebrating the contributions of the Hispanic community through ‘Many Faces. One Culture’. Hispanic Heritage Month is a tribute to the incredible diversity, unity and passion that makes us thrive,” said Natale.

Natale’s deal with PepsiCo is the first in a series of collaborations that the SuperLatina will be focusing on as part of a concerted effort by her company, AGANARmedia, to develop empowerment programs with organizations that are committed -in words and action- to the advancement of gender parity, pay equity and talent diversity.