LOS ANGELES, Sept. 5, 2017 /PRNewswire-HISPANIC PR WIRE/ — Ever since her first on screen appearance in the United States on CNN Latino’s Corazones Guerreros (Warrior Hearts), Natalia Denegri has become a well-known figure for Hispanic television viewers across the country. This is largely thanks to the family friendly appeal of her show and the unique vision of combining journalism with an altruistic mission, finding life stories that required solidarity as well as providing the resources necessary to help the show’s stars move on with their lives. The series garnered multiple awards, among them the Carteles in 2014. The following year the mayor of Miami, Tomas Regalado, presented Natalia with the keys to the city, and even though CNN Latino closed its doors in 2014, the show moved to MiraTV, where Natalia brought multiple shows to life that set her on the path towards the Emmy. Chief among them Doble exilio (Double Exile), which tells the story of the Cubans who immigrated to Venezuela and later to the United States only to face the chaos that came with their newfound home. The program, produced by Nelson Bustamante and Elizabeth Hernández, also received the AIPE Latin Golden. She received an Emmy nomination the following year for Pon el foco en la carretera (Put the Focus on the Road), for which mayor of Doral Luigi Boria bestowed her with a medal of honor for her journalistic work. Denegri also hosted Atrevidas on MiraTV and created the documentary Que todo el mundo se entere (Let the Whole World Know) for the same channel, which highlights the difficulty of the situation going on in Venezuela, for which she received two awards in the FICIP Film Festival of Mineral de Pozos. The talented television host also has a strong philanthropic side, acting as the godmother of multiple institutions that help children affected by autism. 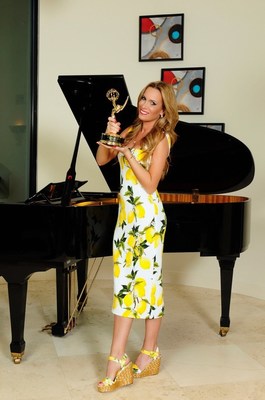 Although the achievements since the start of her television career in her native land of Argentina have been many, Denegri is still hungry for more. She is currently working on the newest season of Corazones Guerreros, which will be an initiative led by the founders of Hasbro with the Hessenfeld Family Foundation, an organization recognized for its philanthropic efforts by multiple groups around the globe, such as Hessenfeld Children’s Hospital in New York. The new season will be the most ambitious to date and would include interviews with powerful Latin American personalities, foundations that help children in need, specialists, and positive community role models for children and families alike. Denegri’s years of experience with the show also led her to write a book, Corazones Guerreros: historias de vida (Corazones Guerreros: Life Stories) which has been available on Amazon since August 12th. She has also put together a production company known as Trinitus Productions with the hope of making and producing a myriad of films. The first of which, Uma, will have its world premiere in the upcoming Burbank International Film Festival. Directed by Venezuelan visionary Alain Maiki, who premiered Devuélveme la vida (Give Me Back My Life) last year, the film is a story of young love starring Venezuelan natives Alexandra Braun and Orlando Delgado, the both of which will see their relationship strained by an unexpected event. Denegri, who won an award for her acting talents in the Argentine film El pozo (The Well) as well as having worked in theater in her native land, will also play a key role in the film. As a result, Natalia, who is currently working on two other feature films and has produced 4 Emmy nominated docs, will travel to Los Angeles to be on the red carpet for the festival’s inauguration on September 6th and her film’s premiere on September 10th. She’ll then travel to Italy to assist in the premiere of Uma there as well as to present the Italian edition of her book, which will be published by Infinito Edizioni.

For more information or to set up an interview with Natalia, please contact
Ana Matonte of Hispanic Bridge at (818) 207-8671 or email her at anacmatonte@gmail.com