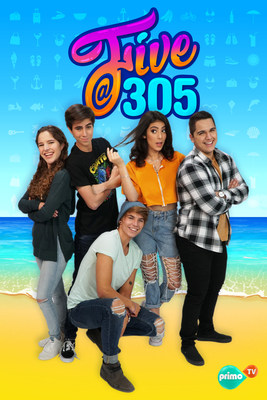 “Primo TV has always been innovative with its programming and we are thrilled to bring this upcoming series to our bicultural U.S. Hispanic audience,” said Michael Fernandez, Director of Marketing of Vme Media Inc.

The series created by Broadway Musical Theatre LLC., and produced by Richard & Angelica Torres follows the lives of five young friends living together as they struggle to find success and happiness in Miami. Five @ 305 is currently being produced in Wynwood and features talent from across Latin America.

“At Vme Media, we are very proud to be a part of this series.  We love that it takes place in Miami and that it reflects the tremendous diversity, creativity and energy of the city.  Hopefully, young people of all backgrounds will see themselves in the experiences of these characters,” added Doris Vogelman, VP of Programming at Vme Media Inc.

Five @ 305 began production in January and is set to premiere April 5th on Primo TV.

Primo TV is the first English language network targeting U.S. bicultural Hispanic Gen Z viewers (6-16) and their families with inspirational and educational programming. Owned and operated by Vme Media, Inc., Primo TV offers culturally relevant programming in English, appealing to parents as a way to keep their kids culturally engages with their Latino roots. Primo TV is currently available nationally on Comcast Xfinity. For more information please visit www.primotv.com or follow us on social media via www.facebook.com/primotelevision/ or www.twitter.com/primotelevision