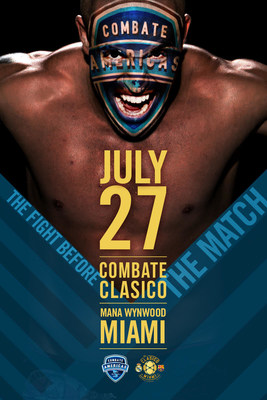 Tickets for “Combate Clasico” are on sale online at Ticketon.com.

In the main event of a 10-bout affair that takes place at Mana Wynwood, the two premier, pound-for-pound fighters from rival cities in Spain – Abner “Skullman” Lloveras (20-9-1) of Barcelona and Javier Fuentes (9-4) of Madrid – will face off two days before the El Clasico Miami, a meeting between global soccer powers Real Madrid and FC Barcelona at Hard Rock Stadium in Miami. The match, which marks the clubs’ first meeting in North America and the first outside of Spain since 1982, is part of the International Champions Cup presented by Heineken.

The “Combate Clasico” live MMA event will be part of a nearly week-long extravaganza that will begin with a match between marquee soccer clubs Juventus and Paris Saint-Germain at Hard Rock Stadium on July 26 as well as concerts, parties and other interactive events prior to El Clasico Miami on July 29.

For more information on El Clasico Miami fans can visit elclasicomiami.com and internationalchampionscup.com.

“Relevent Sports is thrilled to partner with Combate Americas,” said Relevent Sports Chairman Charlie Stillitano. “Combate Clasico promises to be another must-see event in the lead up to El Clasico Miami at Hard Rock Stadium.”

“We are excited to be working with Relevent Sports and the International Champions Cup to bring the Combate Americas brand of electrifying, professional Hispanic MMA action to Miami,” said Combate Americas CEO and UFC co-founder Campbell McLaren. “This promises to be a phenomenal week of live sports and music, culminating in a historic showdown between the world’s two biggest soccer powerhouses.”

The 27-year-old Fuentes is an aggressive-minded and fast-paced competitor who has earned all of his professional career victories to date by way of (T)KO or submission.

Additional matchups for “Combate Clasico” will be announced soon.